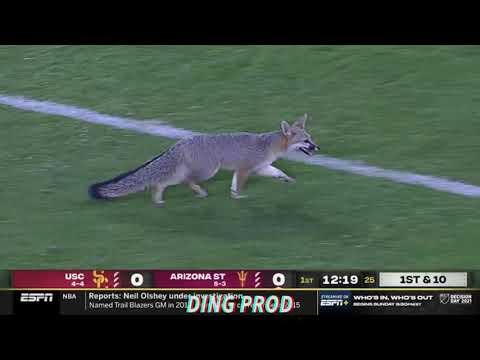 We’ve seen animals wander onto the playing field during televised football and baseball games quite a bit, but they are usually dogs or cats or an occasional escaped mascot. You don’t expect to see a wild animal invading a game, especially in a packed stadium. When Arizona State played the University of Southern California in Tempe on Saturday, broadcasters were surprised to see a fox on the field! The fox seemed surprised, too, and tried to escape by jumping into the stands.

It was a novel situation for all involved. The crowd, of course, was amused but also concerned with the safety of the fox. If it were a dog or cat, they would try to grab the animal, but it was hands-off all around in the case of a fox. After another trip through the playing field, the fox made its escape, to thunderous applause.

You might wonder why a wild fox would ever approach a crowded stadium. Wild animals have been forced into the proximity of humans by encroaching cities and loss of both habitat and prey, and they’ve adapted by taking our trash for food. A fox does what a fox gotta do. -via Digg