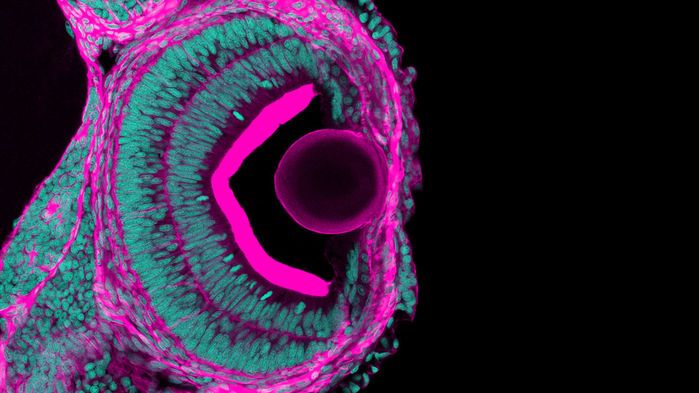 Cephalopods such as squids and octopuses still amaze scientists up to this day because of their sophisticated eyes “that rely on a lens to focus light provide them excellent vision”. The complexity that resulted from their independent evolution have baffled biologists for centuries. Hence, biologists resolved to understand how this phenomenon happened.

Evolutionary developmental biologists have now discovered that the genes that guide the initial formation of legs in us and other vertebrates also guide the formation of the squid’s lens (seen in cross section of eye above). The find is yet another example of how nature recruits genes used for one purpose to do another job for the body.

The squid lens forms as extra-long membranes jutting out for specialized eye cells overlap to form a tight ball. Our lenses are actually degraded cells themselves packed with a clear protein. To learn how the squid lenses form, these researchers carefully tracked where, when, and which genes turn on and off as embryos of Doryteuthis pealeii, a squid commonly served as fried appetizers, develop.

The researchers were shocked to find out that the gene regulatory network for growing limbs were at work in a developing eye. But when they proceeded to add a chemical called WNT (a chemical that naturally prevents this network in many organisms), the lens stopped forming. This confirmed that this limb network is also a lens network.