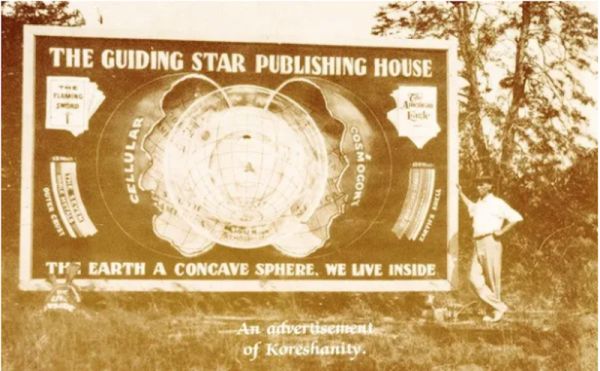 Have you ever heard of the Koreshan Unity? It was another of the many religious sects born in New York in the 19th century, so you will be forgiven for not finding it familiar. Due to the overabundance of fringe groups and communes in New York, the Koreshan Unity moved to Chicago and then ultimately to Florida, where the group grew to around 200 members in their heyday.

It all started with science. Well, ostensibly. Cyrus Teed, an eccentric medical doctor and alchemist from Utica, New York, often experimented with dangerous levels of electric current. During one late night in his laboratory in 1869, Teed was knocked unconscious by his own experimental attempt to turn lead into gold and had a vision –or as he called it, “The Illumination”. A beautiful woman appeared and imparted to Teed the truths of the universe: the secret of immortality, that God was both male and female, and that we live on the inside of the Earth’s crust. The angel told him he was the seventh prophet in a line that included Adam and, most recently, Jesus and that he had been sent to redeem humanity.

The Koreshans settled in a southwest Florida swamp near Ft. Myers and spent years building a rather nice village in Estero, which ultimately became the property of the state of Florida and is now a state park. Read about the Koreshan Unity and their settlement that is now a well-preserved historical site at Messy Nessy Chic.

Supporting Women and Saving the World One Bag at a Time

The Art Of (DE)Construction”: The Superb Collages Of Nicollages

The Urgency and Resonance of Chakaia Booker

The Many Feminisms of Contemporary Art