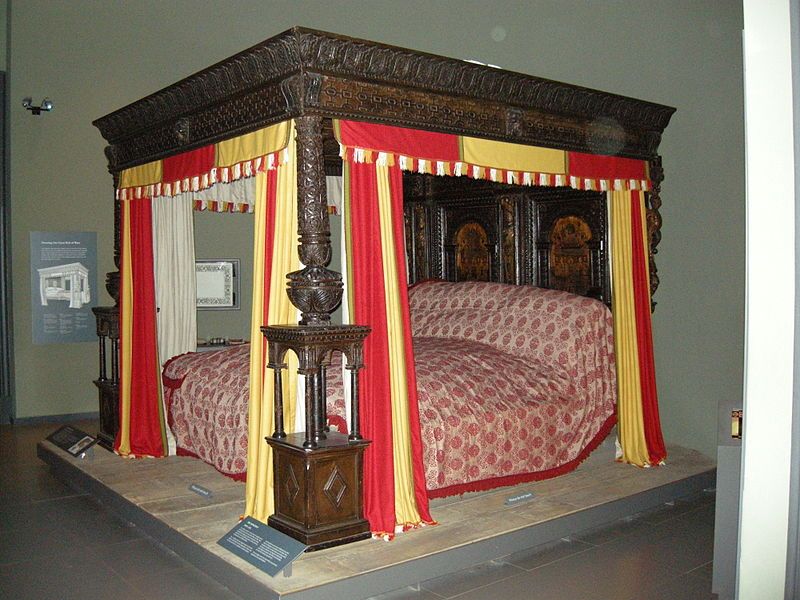 In Act 3, Scene 2 of Shakespeare’s Twelfth Night, the amusing but vile Sir Toby Belch refers to a sheet of paper that “were big enough for the bed of Ware in England . . . .” This is a reference to the Bed of Ware, an enormous bed that was a tourist attraction in England during Shakespeare’s day and remains so today.

Ware is a village north of London. An inn there commissioned the construction of and housed this enormous bed. It’s now housed at the Victoria and Albert Museum, where it continues to attract visitors, although you’re no longer allowed to sleep in it. Amusing Planet describes the bed:

One of the most famous piece of furniture in history, this spectacular four-poster bed measures ten feet by eleven feet, and is reportedly large enough for four couples to lie side by side without touching each other. […]

Unfortunately, the bed has been greatly vandalized and defaced by guests, possibly by amorous couples who had spent a night on the bed and found obliged to carve their initials into the wood with a penknife or another sharp object. Some applied red wax seals to mark their night on the bed.

The bed stayed in Ware for nearly three centuries, passing around several inns before it moved to Hoddesdon in 1870 and became a bank holiday attraction during the boom in rail travel.