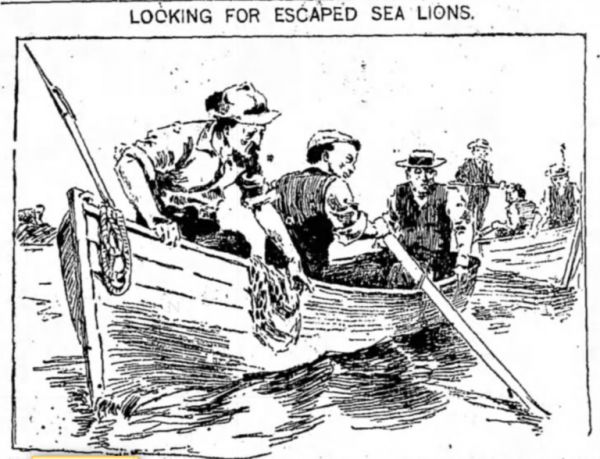 In April of 1897, after being shipped across the continent, 16 seas lions arrived at their new home, Starin’s Glen Island summer resort on the Long Island Sound. By the end of the day, three of the sea lions had escaped, crossing a metal rail and going over, or perhaps under, a six-foot fence. But it wasn’t long before the seals were seen again. Just the next day, 13-year-old Willie Grogan went for a sunset swim in the sound.

According to The New York Times, Willie had just surfaced from a dive when he heard what sounded like a human cough. It was dusk, so he couldn’t see that well. He wasn’t supposed to be swimming there at that time, so he feared that a police officer had spotted him from the pier.

At first, Willie thought the cough was coming from a bald man with a long, droopy mustache. Thinking it was perhaps a local German saloon keeper taking a night swim, the boy yelled out, “Hello Dutchy!” The response was another cough.

Forgetting all of his fears of getting caught by the police, the young boy started to scream as he swam back toward the pier. All he could think of were sea serpents, sharks, and Jonah the whale.

The sighting set off a flurry of sea lion hunting, as the park had offered a reward for the escaped animals. Read the story of the great sea lion escape at The Hatching Cat. -via Strange Company