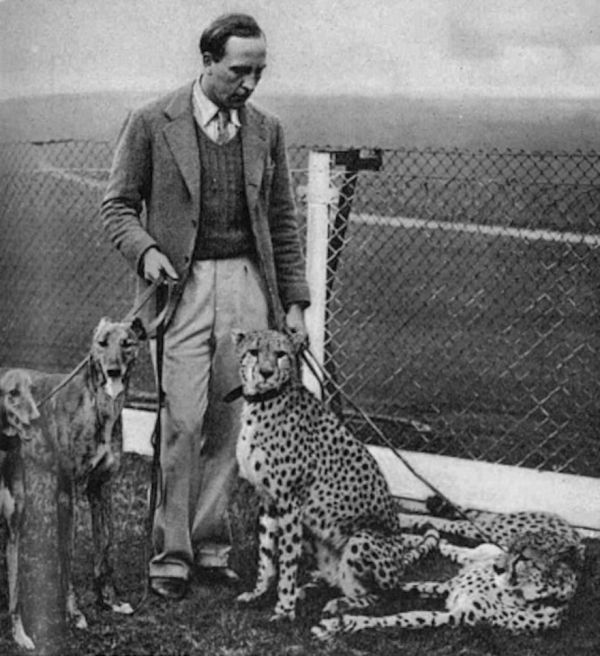 British athlete and adventurer Kenneth Cecil Gandar-Dower imported a dozen cheetahs in 1936. He planned to stage races featuring both greyhounds and cheetahs and entice people to attend by challenging the dogs’ reputation as the world’s fastest animal. That would take time, as the cheetahs had to endure quarantine and then training. The idea was controversial, as various journalists and politicians were concerned about the treatment of the dogs, the cheetahs, and their prey. There were also concerns about the danger to the public, although Gandar-Dower assured everyone that cheetahs were both trainable and docile. This, despite a few attacks that led to two of cheetahs being put down.

But the assertions of domesticity did hold mostly true, and onlookers generally described the behavior of the cheetahs as indifference with a crafty streak. The rabbit attached to the electric hare was always killed in advance, as Gandar-Dower had promised, but had to be extremely fresh to entice the cheetahs. If another cheetah looked likely to win, they gave up quickly, but if the bait went past a turn without a pursuer, the cheetahs were clever enough to cut across the middle of the track. In December of that year, the cheetahs raced for the first time against greyhounds in front of a packed crowd at Romford Stadium, and seemed completely unperturbed by dogs, humans, and even large camera flashbulbs, save for a few domineering swats at a greyhound who got too feisty. Pongo, the tamest of the cheetahs, even allowed children to reach down from the stands and pet him, though another named Helen reportedly spat at a race announcer who tried the same.

We know now that cheetahs are faster than greyhounds, although they have little endurance over long distances. The cheetahs continued racing for several years, while changing owners, trainers, and venues, up to the the beginning of World War II. Read about Gandar-Dower’s racing cheetahs at Damn Interesting.