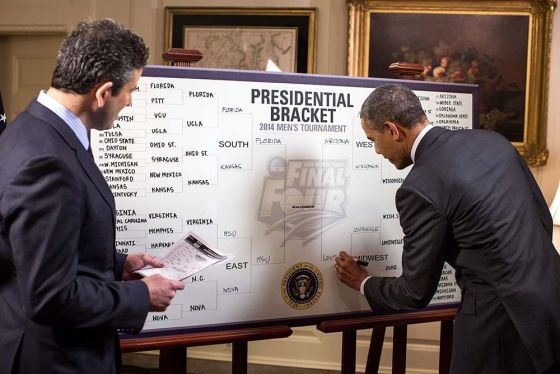 It’s time to make your predictions for the men’s NCAA basketball tournament! You can get a bracket to fill out here. The tournament bracket is handy for keeping up with games, and for understanding how teams are eliminated along the way. But when did this kind of bracket come about? The first one was organized in the 19th century by chess master Howard Staunton.

For a chess tournament in 1851, Staunton had 16 players draw lots for random pairings, called brackets because they resembled the punctuation marks of the same name. The eight winners would then draw lots for pairings, and the four winners from that round would do the same, leaving two finalists. The idea, Staunton said, was “to bring the two best players in the Tournament into collision for the chief prize.” The reality, however, fell short: Random drawing after every round led to complaints that some players had easier matches. As a result, chess tournaments shifted to a round-robin format.

Brackets were used again—and have been ever since—for the Wimbledon tennis tournament in 1877, and they found a home in college basketball in 1939, when the National Association of Basketball Coaches had an eight-team tournament. The University of Oregon beat The Ohio State in what is regarded as the first NCAA Tournament.

The science of constructing a tournament bracket has evolved quite a bit. The NCAA ranks teams for seeding to make sure the top teams don’t meet each other in the early rounds, and in most years, there are geographic considerations (but not this year). Read about how the tournament bracket came about and how March Madness took over the country, at Mental Floss.