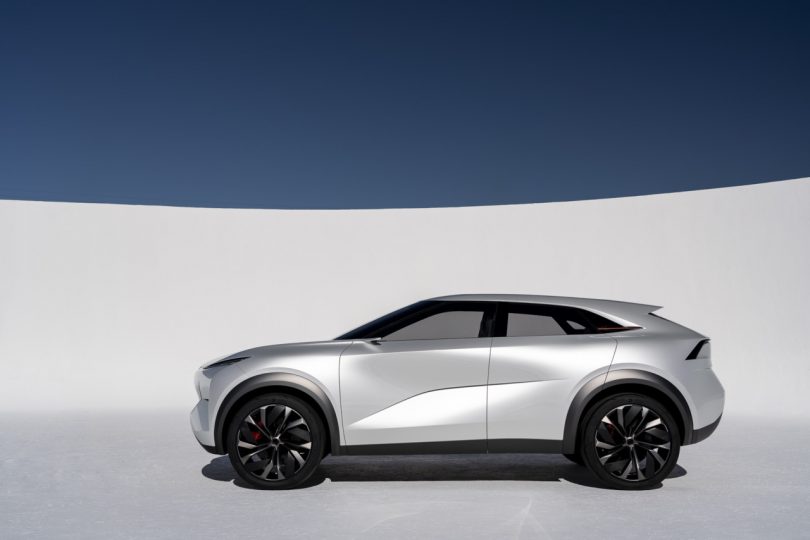 Glowing ghostly in a sheen of Liquid White pearlescent paint inspired by the winter snows of Mount Fuji, the INFINITI QX Inspiration Concept unveiled at the Detroit Auto Show is a serene expression of the automotive brand’s most idealistic architectural expressions of technology, luxury materials, and the Japanese concept of ‘Ma,’ – the spatial tension existing between lines. 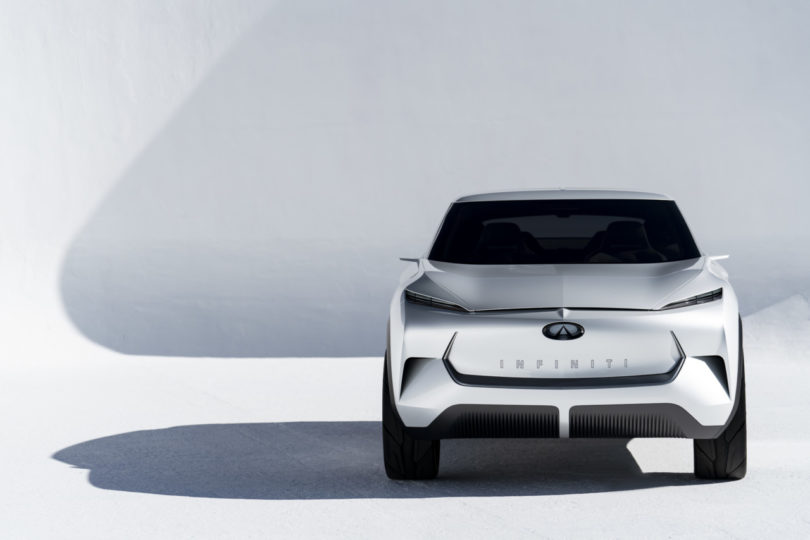 The all-electric SUV’s cab-forward exterior is sharply influenced by Japanese origami, aggressively creased across angled panels. Squint, and the QX Inspiration’s profile can evoke the the profile of a patient muscular grey heron leaning to strike its prey. Open eyes wide and it’s difficult to ignore the concept’s enormous 22-inch wheels and a grill-less fascia (without a combustion engine, the grill becomes an anachronistic detail). 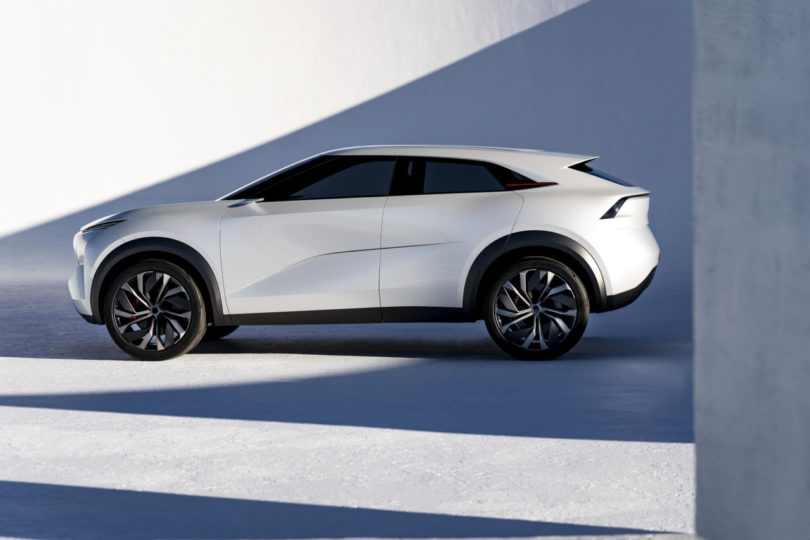 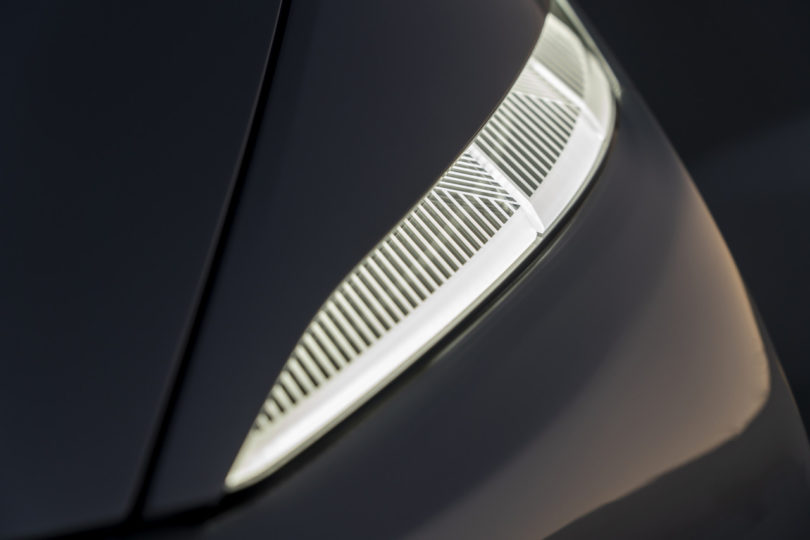 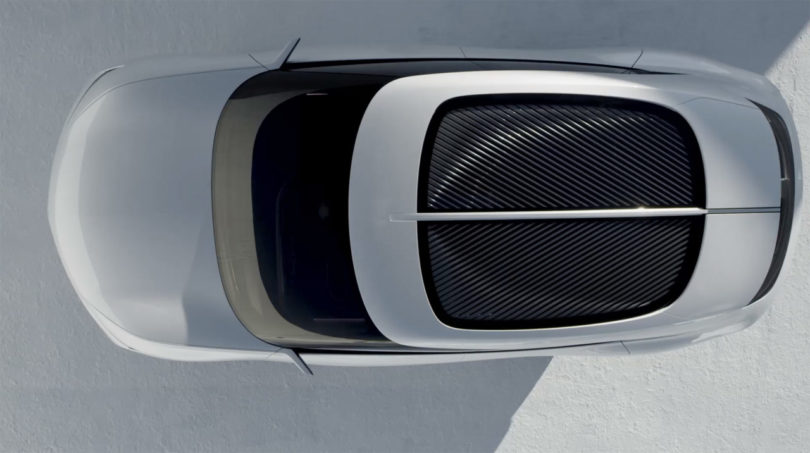 One of the more unique and striking details is the vehicle’s louvered slat roof, made of Japanese red cedar (or sugi), an architectural pattern echoed in the headlamps. 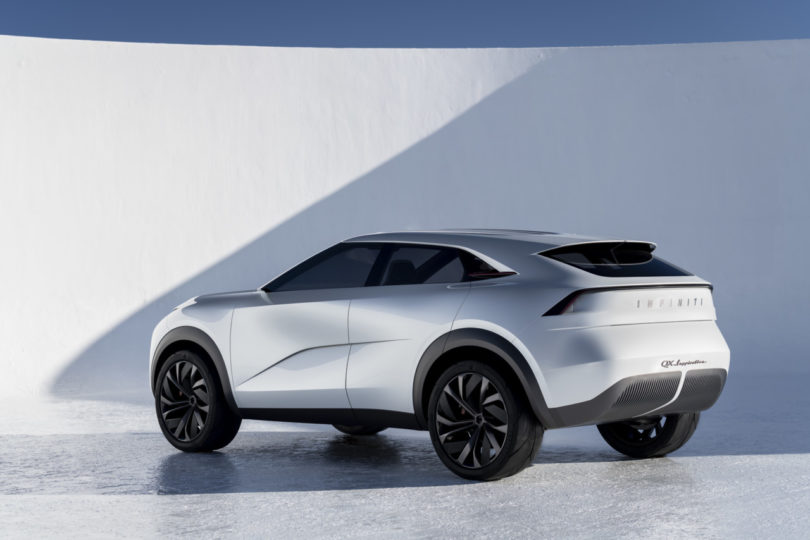 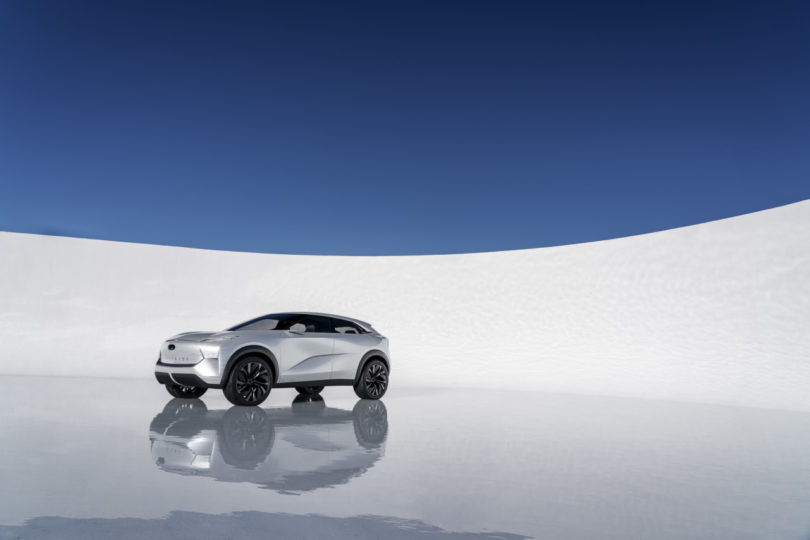 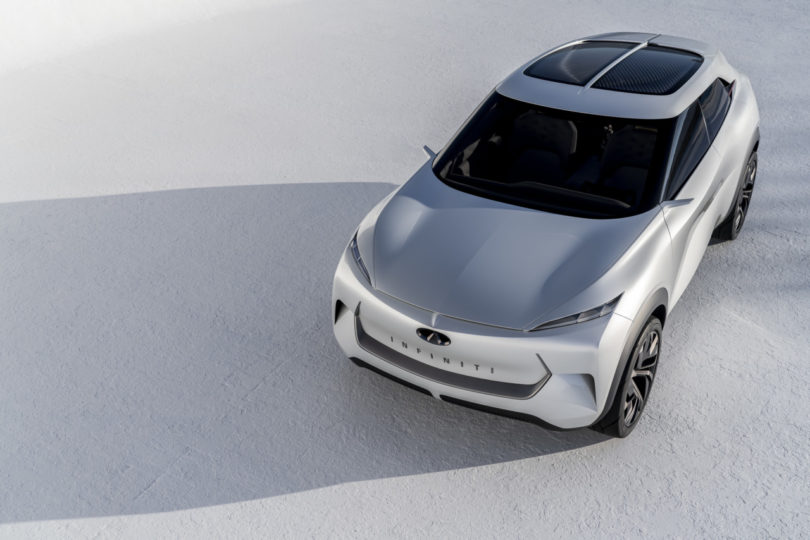 The INFINITI QX Inspiration is a midsize SUV concept previewing the brand’s first fully electric vehicle. As a company with technological and powertrain innovation at its core, electrification is a natural next step for INFINITI. The INFINITI lineup of the future will consist of a range of electric, e-POWER and performance hybrid vehicles. 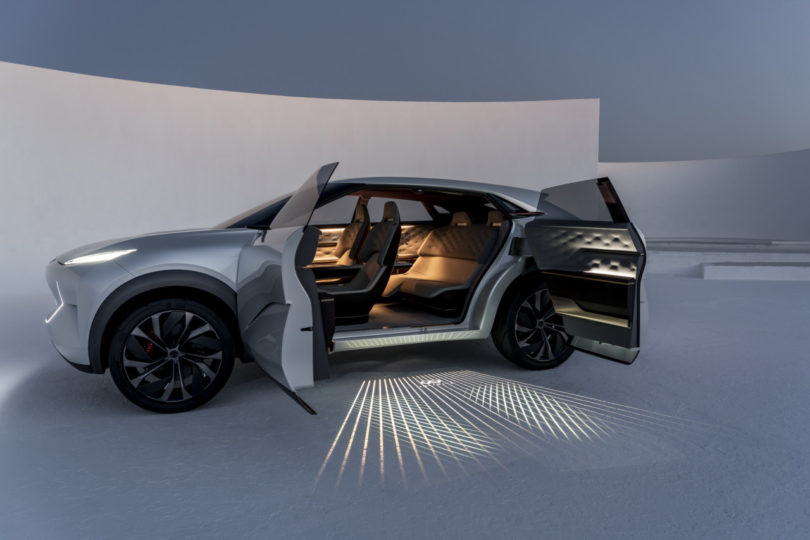 For the interior we followed the principle of omotenashi, or Japanese hospitality. It’s a concept that we discussed a great deal during development of the INFINITI QX Inspiration. Technology is a window into broader horizons, and we want that window to be inviting, welcoming, enticing – staying true to our Japanese roots. 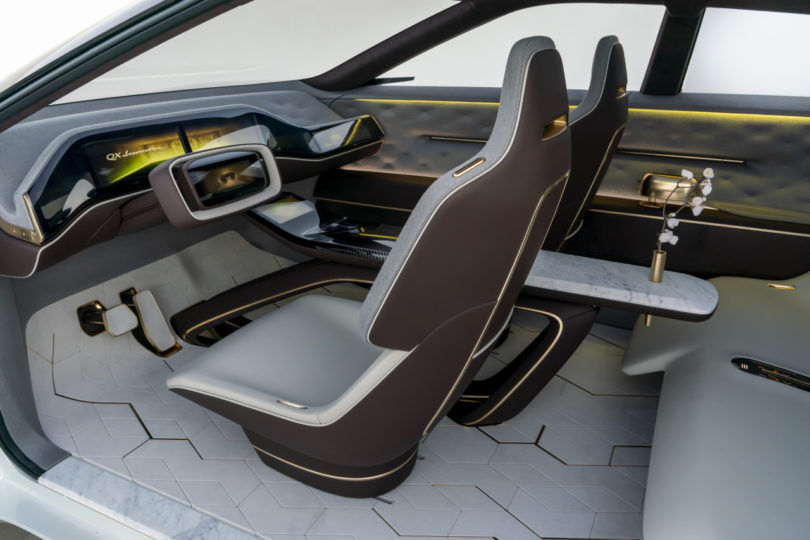 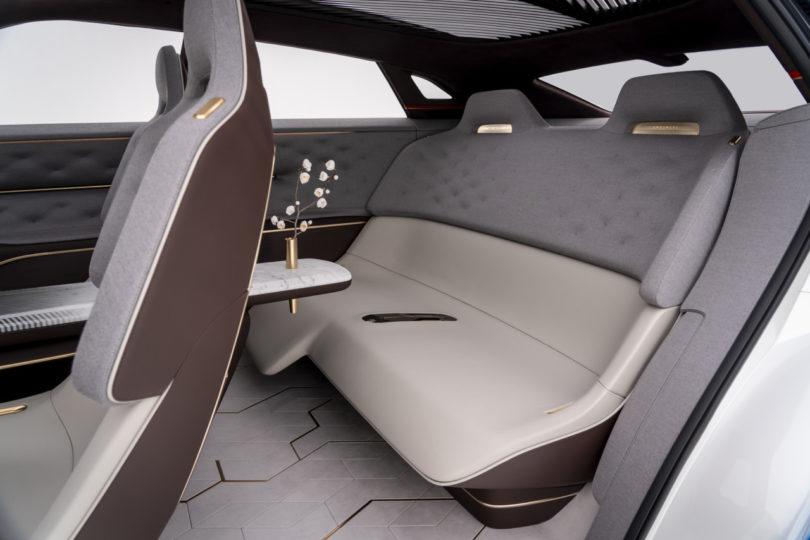 The tufting detailing references the classic Chesterfield lounge chair, with tufted cloth extending from the front of the cabin wrapping all around into the rear sofa-style seating area intersected by a center console covered in Bianco Carrara marble, complete with floral vase. 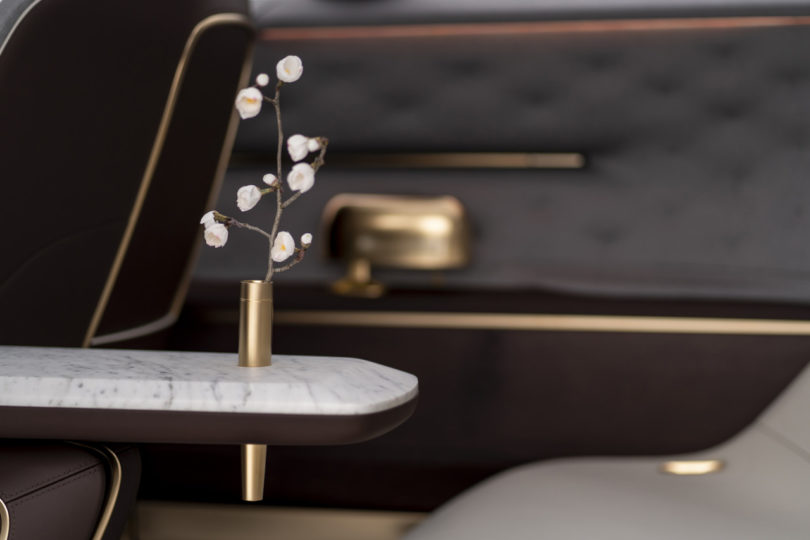 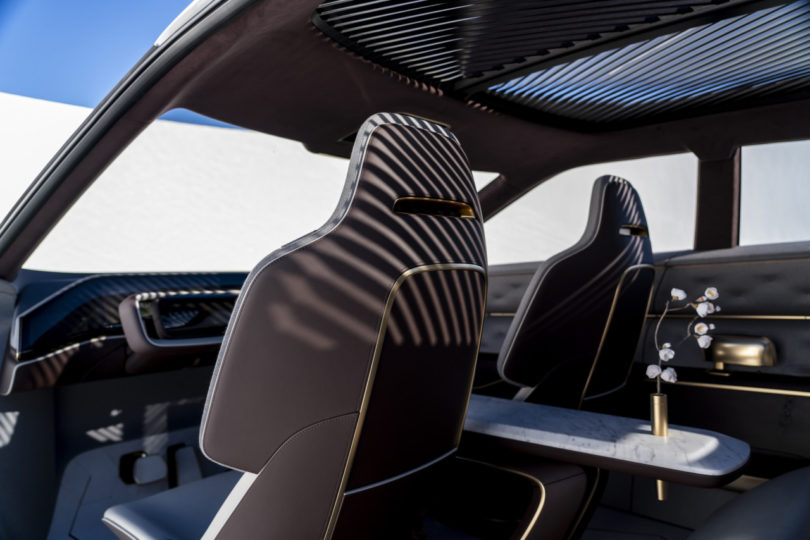 For now the Infiniti QX Inspiration stands as a one-off concept intended to showcase the brand’s most idealistic aesthetic and technological next-generation intentions. But don’t be surprised to see more than bits and pieces of this electrified prototype sports ute’s vision of the concept of Ma permeate across Infiniti’s vehicles as they forge toward an electric future.