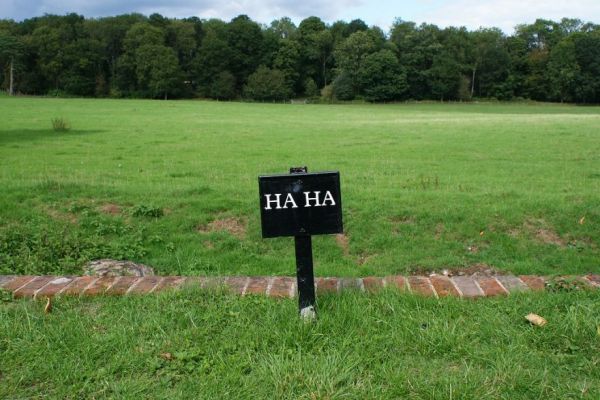 There are many kinds of walls, and even among those built on a country estate, designs vary according to their purpose. One rather ingenious wall design is the ha-ha, possibly called that because that’s what people said when they saw how it worked. From the grounds of well-kept estate, it was barely visible, and what you saw was not only minimal, but aesthetically pleasing. What you didn’t see was a barrier that kept animals out of the yard.

In those early days, before mechanical lawn mowers, sheep and cattle were often allowed to graze on the ground to keep the grassland trimmed. A ha-ha was typically constructed between the estate’s gardens and grounds to prevent grazing animals from crossing over to the manicured lawn and gardens adjoining the house, while generating a continuous vista of the garden and landscape beyond. Unlike an ordinary trench, which may turn into a moat or become overgrown with vegetation, a ha-ha keeps the estate ground in an impeccable state by allowing livestock to graze right up to the stonewall.

Find out how a ha-ha works, and see examples of its use at Amusing Planet.