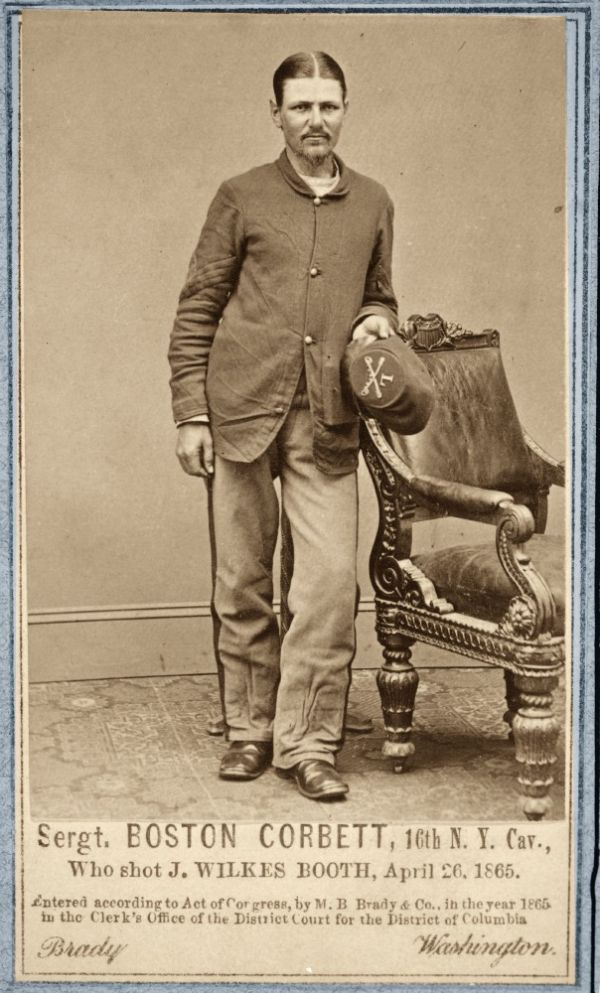 Thomas H. “Boston” Corbett went down in the history books as the man who avenged President Abraham Lincoln by shooting and killing his assassin, John Wilkes Booth. However, Corbett led quite an eventful life, mainly because he was seriously mentally ill. He was a hatter, a profession known for psychosis induced by inhaling mercury fumes (hence the phrase “mad as a hatter”). Corbett was also a soldier, a street preacher, a self-inflicted eunuch, and an asylum escapee. But let’s refresh our knowledge of the incident in which Boston Corbett’s military unit was dispatched to find Booth after he murdered Lincoln and fled Washington.

They located Booth, then set the barn he was in on fire to force him out. Precisely what happened next is unclear, but Corbett’s unit was under strict orders to take Booth alive so he could be questioned. Corbett, upon seeing Booth through a slat in the wall, instead shot him very dead. Corbett claimed self-defense in response to Booth raising his gun, to which some witnesses called BS, while a couple argued that it might not have even been Corbett who fired. Whatever happened, Corbett took credit, and was stuck with everything that followed.

Corbett was unrepentant about disobeying orders, claiming that God had directed him — which if nothing else, certainly one-upped Booth’s claim that he had been an instrument of God’s justice. There was talk of a court martial, but that was abandoned when the media and the public began celebrating Corbett as an American hero. So Corbett was thanked by the government, given a portion of the reward money (the modern equivalent of about $27,000), discharged (this time honorably), and sent on his way. Like many people, he then had to figure out what to do after the biggest moment of his life. And like with many people, it didn’t go well.

Yes, there’s a lot more to Corbett’s story, and of course the part that took hold as you read this was “self-inflicted eunuch.” Read about that and the other adventures of Boston Corbett at Cracked.