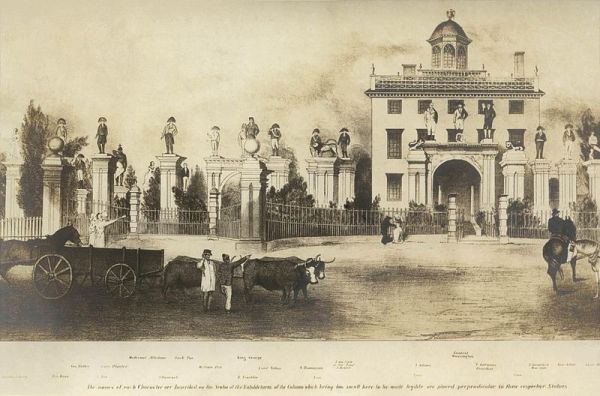 Timothy Dexter was born into Boston’s working class in 1748. He achieved some success as a leatherworker, but became rich through marriage. He moved into a high-society area, where his neighbors included some of America’s Founding Fathers, and although they found Dexter tasteless and annoying, they put up with him. But having money, he went on to make more money.

With the upward trajectory of Dexter’s life in full swing, it was his ability to seemingly fall ass-backward into piles of cash despite the lack of any skill that brought him the riches he became known for. The first, and the one that set the tone for everything to follow, was his directionless speculation on American money. The Continental dollar was one of our first attempts at making money, and … we weren’t that good it turns out. A comical failure to the point of becoming a punchline at the time, Dexter made a ludicrously risky and stupid decision to hoard up the currency at its lowest possible value on the slim chance that it may one day be reinstated as the dollar of choice for this great new country. Though, of course, this never happened, Alexander Hamilton did work the constitution to allow for the trade-ins of these bills for 1% of face value and, overnight, Dexter became filthy rich. Despite having zero intention of playing the game how it worked out for him.

Dexter then built a notorious 20-room mansion and festooned it with 40 statues of prominent Americans, including himself. Later business ventures made him even richer with a combination of reckless risk-taking and unbelievably dumb luck. Read the story of Timothy Dexter in the snarky and colorful language you’d expect from Cracked.