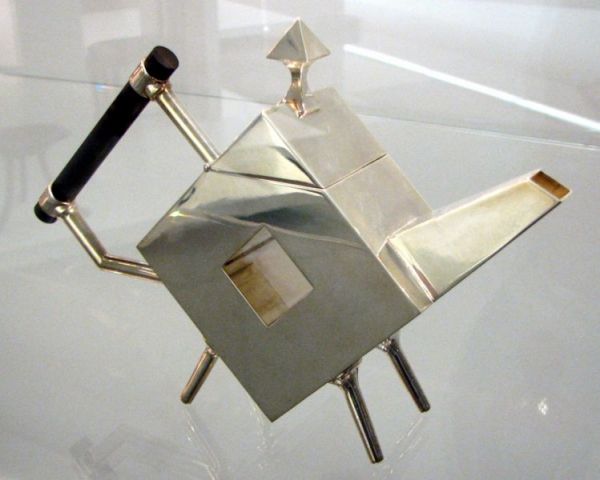 In 1879, English designer Christopher Dresser produced a small silver teapot in a sleek, geometric design. It wasn’t practical enough to be mass-produced, so it remained a design concept. The modernistic design was decades ahead of its time, which only became apparent later. The teapot was acquired by the Victoria and Albert Museum in London, and was assumed to be the only one in existence. But in 2007, another turned up in Canada. A man in Quebec (assigned the pseudonym Tremblay) took a small teapot to a filming of Antiques Roadshow.

Before the actual filming of the episode began, the dealers sifted through the possessions of hundreds of guests in search of unexpected discoveries to highlight in the television show. Tremblay pulled out his Chinese bronze figure. The dealers merely looked at it and shrugged their shoulders. Their lack of interest changed to stupefaction, however, when the teapot was set on a table. The specialists formed a circle around the piece. The expert in English silver, Bill Kime, studied it carefully for authentic signs of age and checked its marks, which were clearly impressed on the bottom of the teapot. Kime was familiar with Dresser’s reputation as a late-nineteenth-century English designer and could barely believe the existence of this find. When the cameras started rolling, Kime declared that the teapot might fetch about $20,000 to $25,000 at auction, and perhaps even more. Tremblay beamed. He couldn’t believe his good fortune and returned home to consider the news of this too-hot-to-hold teapot.

When Tremblay signed up to sell the teapot through a British auction house, his actions triggered a Canadian law designed to prevent significant heritage art from leaving the country. Thus began a struggle among the owner, museum curators, appraisers, and the auction house over the tiny teapot. Read that story at the Walrus.  -via Damn Interesting

The New Issue of Create! Magazine Is Out Now

Afterlife Recyclable Furniture Is Circular Design at Its Best

Modernist Pillows That Bring Color, Pattern + Texture Into the Home