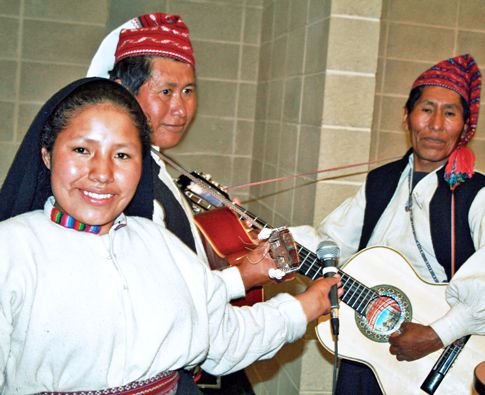 Taquille is a Peruvian island in Lake Titicaca. The 1,300 people who live there have some unique cultural traditions developed over centuries of semi-isolation from the mainland. One of those developed from knitting.

Both men and women knit, but men in particular knit woolen caps called chullos. The colors and patterns are codes that describe the wearer. Women evaluate potential mates based on the quality of their knitted chullos. BBC Travel interviewed residents about this practice:

According to Alejandro, the sign of good partner is one who can make a pin-tight chullo – one knitted so well that it is able to hold water over large distances when turned upside down. Would-be fathers-in-law often test the chullos of their daughters’ potential husbands in this way. Alejandro proudly explained that his chullo could hold water for up to 30m without losing a single drop, and was impressive enough to attract his wife, Teodosia Marca Willy, 44 years ago.

“She saw good skills apparently in my chullo. I used to make a really good hat; I was a good knitter,” he said.