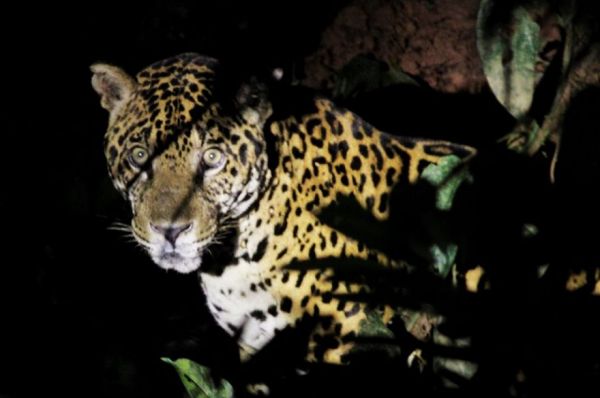 The jaguar is the biggest cat in the Western Hemisphere. Weighing 100 to 200 pounds and strong enough to drag a tapir up a tree, they roam the wilderness of Peru’s Candamo Valley. That’s where Nadia Drake went with a research expedition to study macaws. They were told that that area was so uninhabited that the wildlife don’t know enough about humans to be afraid of us. One night, a jaguar (the one in the photo) was seen observing the path between the camp and their latrine, causing the crew of nine to make other arrangements. Drake fell asleep, and was wakened by a coworker insisting they abandon camp.

Instead, I saw eight people standing almost completely still, transfixed by the large, dappled cat gracefully, silently stepping down the hill. Her muscled body stretched and contracted as if she were a coiled spring, each foot falling perfectly into place. When she reached the small, shrubby patch of forest, she paused, settled down in the foliage, and stared at us.

No one knew what to do. Though the cat was not displaying any signs of aggression, we were a leap away from an apex predator that kills with a single bite and easily outweighed the smallest of us.

Unarmed, and reasoning that perhaps she might behave similarly to pumas—who retreat from or don’t bother larger animals—several of our team decided to link arms and slowly walk toward her, with the intention of gently driving her back into the forest. But as the human chain began moving down the trail, the jungle’s fiercest beast rose onto her paws and did a most unexpected thing: She padded toward them. Calmly, quietly, one foot in front of the other, the jaguar walked even farther into camp, on a collision course with our burliest crew members.

Drake obviously survived the encounter. While telling the story, she shares a lot of information about jaguars with us at The Atlantic. -via Metafilter

Rating The Jaguar Is Made for the Age of Humans is 5.0 / 5 Votes: 5
Please wait...
Loading...
Related articles

Jonas Mekas’s Diary Reveals His Uncertain Sense of Self