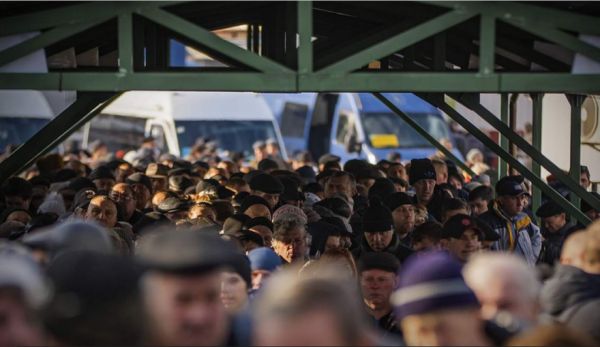 In 2014, Russia invaded Ukraine and took possession of Crimea on the Black Sea, and later the Donbas region, which contains most of Ukraine’s coal mines. Many Ukrainians fled to the west, while Russian nationals and separatists stayed. And the elderly. When you are in your 80s, it’s hard to leave the only home you’ve known all your life. But the checkpoints along the occupation zone may stand between you and your family members -or your pension. So residents line up on both sides of the border at checkpoints, waiting hours for their turn to cross. One checkpoint sees 30,000 people a day. For the elderly, that wait can be deadly. Eighteen civilians have died waiting in these lines since December.

At Stanytsia Luhanska, the checkpoint in Luhansk, paramedic Natalia Sylkina is struggling to cope.

“It’s been madness today,” she says. She explains that she and her colleagues are bringing people out of the queues who have already fainted, or are on the verge of doing so.

“There’s already been around 30 patients, with six or seven of them fainting.”

The previous day they treated 31 patients, she says.

“They’re all squeezed together. They can’t breathe… We’ve been raising or lowering their blood pressure here or resuscitating them.”

I discover that those who are 80 and over can actually go straight to the front of the queue, but most don’t know about this, or don’t believe it when I tell them – so fearful are they of losing their place.

Read about the deadly wait to cross the border and the reasons behind it at BBC.  -via Digg