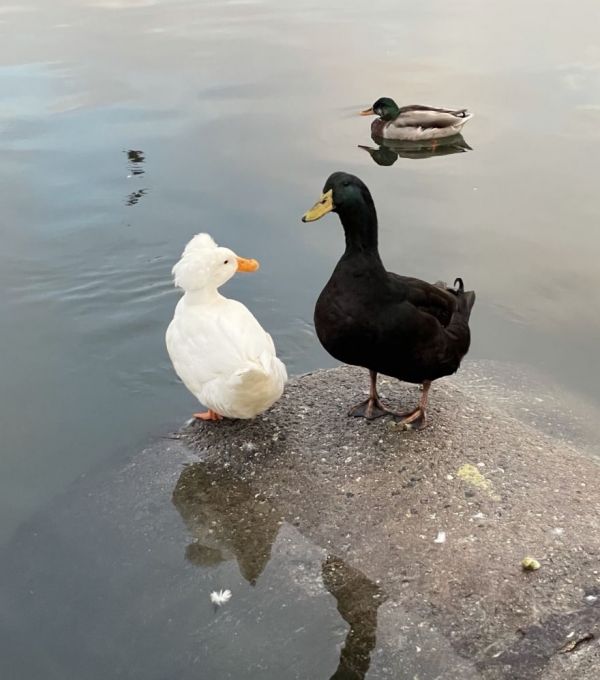 Among the wild ducks of Lake Merritt, Oakland residents noticed and soon became fans of two that really stuck out from the crowd. He was tall, dark, and handsome, with a green head and a proud stance. She was a white duck with a plume of poufy feathers on her head. And they were devoted to each other. The two ducks became social media favorites, as people shared images and videos. But those who know ducks were worried.

“When you see a duck that looks a little different, it’s probably not supposed to be there,” says Kira Kiesler, who, along with her family, runs a Bay Area animal rescue organization called Genevieve’s Gentle Hearts Rescue.

This was the case for the Lake Merritt ducks, whom some in the community call Ebony and Ivory. Both are domestic breeds, not wild like the others around them. Ebony, the black duck, is a male Cayuga. Ivory, the white duck, is a female crested duck.

“They weren’t supposed to be at Lake Merritt, which is why they were so friendly,” Kiesler adds. “Someone actually hand-raised them. And unfortunately, they dumped them there, which is a very common story.”

Read the story of how Ebony and Ivory charmed Oakland and were finally rescued and given a proper home, at the Bold Italic. Do not miss the video of Ivory taking a bath surrounded by rubber duckies. -via Metafilter