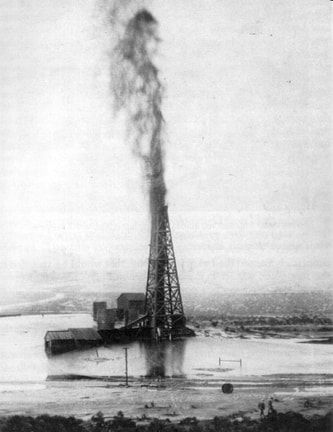 Back in the early days of oil drilling, a blowout was considered as a risky, but natural consequence of the process. This event occurs when oil shoots up from the ground uncontrollably, which results in what we call a “gusher”. The gusher, back then, was the image of the progress of oil exploration, and the “symbol of new-found wealth.” In reality, however, it was a symbol of death and destruction.

[Gushers] have killed workmen, destroyed equipment, and coated the landscape with millions of barrels of oil. The destruction to wildlife and to the environment is catastrophic.

One of the largest, and the worst, gushers to happen in history was the Lakeview Gusher in 1910. The oil spill lasted for 18 months, spilling 9 million barrels of oil in the process.

The Lakeview gusher remains the largest accidental oil spill in history, bigger than the Deepwater Horizon disaster, and only eclipsed by the oil spills during the 1991 Gulf War, when Iraqi forces deliberately dumped massive amounts of oil into the Persian Gulf to thwart the US Marines from landing on Kuwait’s coast…

Learn more about this historic disaster over at Amusing Planet.

A Painter of Organized Chaos

“Insurgent Poetry” Outside of MoMA During Second Week of Protests

After Budweiser Unexpectedly Paints Over Street Murals in India, Artists Band Together