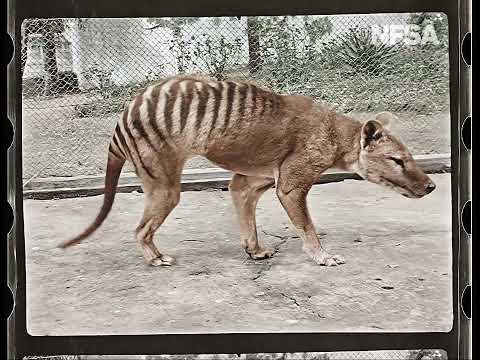 Benjamin was the last thylacine, or Tasmanian tiger, in captivity and as far as we know, the last thylacine in existence. He died in 1936, and the species has been considered extinct since then. Now all that’s left are some lifeless anatomical specimens and a few photos and film footage. We posted this video of Benjamin before, although it was quite a few years ago. But through the miracle of technology, it’s been brought to life in color. The National Film and Sound Archive (NFSA) of Australia commissioned a restoration of the film with added color.

The NFSA created a 4K scan of the original 33-mm negative of a 77-second video, shot by naturalist David Fleay in 1933. This was then sent to Composite Films in Paris, where Samuel François-Steininger and his team recreated the creature’s color in painstaking detail.

Unfortunately, no true color photos or video of the thylacine exist, so the team studied specimens preserved in museum collections, consulted sketches, paintings, scientific drawings and written descriptions from the time, as well as more recent 3D renderings.

“Because of the resolution and quality of the picture, there were a lot of details – the fur was dense and a lot of hair had to be detailed and animated,” says François-Steininger. “From a technological point of view, we did everything digitally – combining digital restoration, rotoscoping and 2D animation, lighting, AI algorithms for the movement and the noise, compositing and digital grading. More than 200 hours of work were needed to achieve this result.”

To be honest, the realistic depiction of the thylacine only underscores how sad it is that they are extinct. -via Damn Interesting