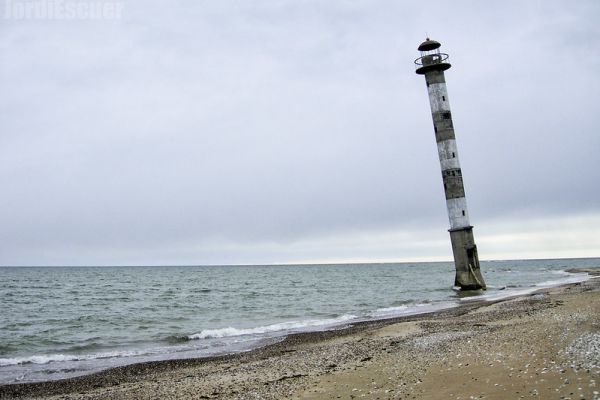 This lighthouse looks a bit dangerous, doesn’t it? This is the Kiipsaare Lighthouse, built in 1933 near the coast of Saaremaa, Estonia. Back then, “near the coast” meant 150 meters inland. Since then, rising sea levels have moved the shoreline, and now the lighthouse stands more than 50 meters out in the sea. And the formerly-stable ground underneath it is no longer stable, so the lighthouse has leaned as much as 15 degrees off plumb.

The lighthouse has been decommissioned and the light removed. It was left abandoned to the sea. But what’s really strange is that over time, it has started to stand straighter! But that doesn’t mean there’s any hope that the lighthouse will ever be useful again. Read more about the Kiipsaare Lighthouse at Amusing Planet.