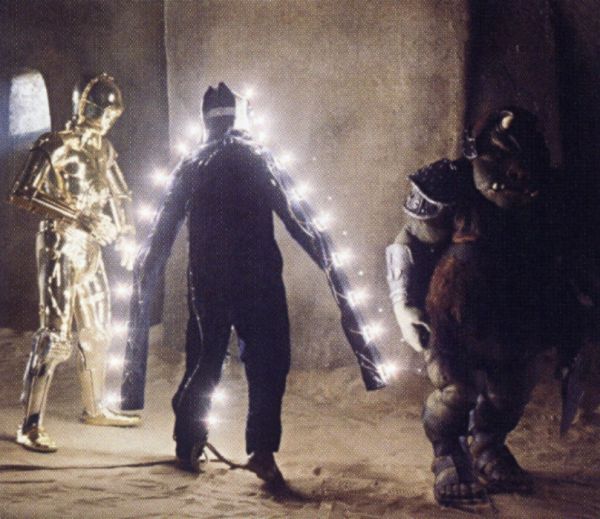 The Star Wars universe is well known for ridiculous alien design. The idea was that different sentient creatures in a galaxy far, far away would not all look like humans… but that idea clashed with what was possible with the special effects technology of the day. In the original 1977 Star Wars, we were astonished by the aliens at the Cantina. Each movie afterward introduced more weird alien types. But as there was a limit to what can be done, there was also a limit to what the audience will buy. The story of the Lightman, or the Lightbulb Man, was the limit. He was a character in The Return of the Jedi tested in 1982. The Lightman was covered in light bulbs.

According to Uproxx, the character was cut because it just looked so funny and not at all believable. But according to a much earlier article at Star Wars Aficianado, the idea was to cover the light bulbs with effects from Industrial Light & Magic to make him a luminescent alien of sorts. The reason for dropping the character was because it slowed down the pacing of the scene. So which is right, and why was the Lightman cut from the movie? Let’s ask Phil Tippett, eho was the visual effects supervisor on The Return of the Jedi. He was there.

I guess that’s the real answer. Star Wars fans will accept some ridiculous alien designs, but with the Lightman, the production found an uncrossable line. Too bad they didn’t have LEDs at the time. -via Mental Floss