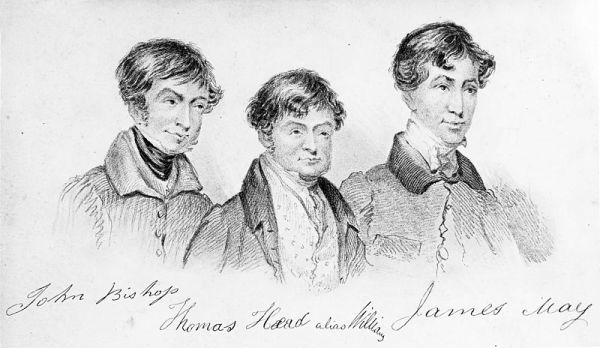 Back when medical schools were new and people had yet to donate their remains for anatomy class, “resurrectionists,” or grave robbers, sold bodies to the schools. In England a group called the London Burkers (John Bishop, Thomas Williams, Michael Shields, and James May) supplied colleges with corpses. It eventually occurred to the Burkers that digging up graves was a lot of work, and it would be easier to procure fresh corpses by just murdering people.

Some of the bodies sold by Bishop and Williams were not stolen corpses but rather people they had murdered. The two men operated similar to two other murderers out of Edinburgh named William Burke and William Hare, who ended up in Madame Tussaud‘s Chamber of Horrors because of their horrible crimes. Like them, Bishop and Williams lured victims to their dwelling, drugged, and killed them.

The site of the horrific murders by Bishop and Williams was in the East end, north east of St. Leonard’s Church in Shoreditch in an area known as Nova Scotia Gardens. The area had previously been a clay field where clay was extracted to make bricks. However, once the clay was exhausted, it was converted into a “leystall” waste area that held human excrement. Cottages had been built on the lower grounds of the clay pits, but they were not very desirable because they were prone to flooding. Yet, despite their undesirability, Williams and Bishop rented No. 2 and No. 3 respectively from Sarah Trueby.

Williams and Bishop’s murders were discovered after they delivered the corpse of a 14-year-old boy from Lincolnshire (later determined to be Charles or Carlo Ferrari) to King’s College. The men had previously tried to sell it at Guy’s Hospital, but negotiations broke down when they wanted too much and the men then took the body to King’s College where they made a deal.

Medical colleges preferred fresh corpses for their studies, but this one was a bit too fresh. While school officials looked the other way when accepting remains stolen from graves, they did not condone murder. Read about the Burkers’ trial and the revelations of their string of murders at Geri Walton’s blog. -via Strange Company
(Image credit: Wellcome Collection)

Sonya Clark Weaves the History of Black Hair Into Art

See Rembrandt’s “The Night Watch” in Its Entirety, Thanks to AI Restoration

The Americanization of Hawai’i, Seen Through One Man’s Life

Cause Of The Permian-Mass Extinction Event Confirmed