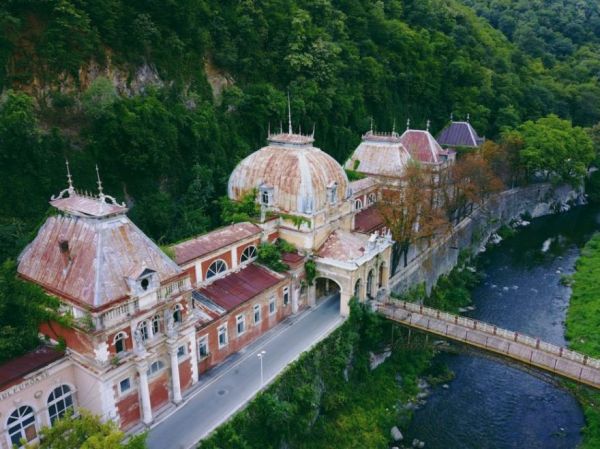 The Cerna River in Romania, and the valley it runs through, is a natural beauty. The area also has a surfeit of hot mineral springs. This led the Romans to use it as a spot for rest and relaxation, and even the legendary Hercules is said to have vacationed there. The town of Băile Herculane grew to be a resort for the entire world, drawing the elite of the Austrian Empire to Romania for healing and renewal. Celebrities from Queen Victoria to Mark Twain visited.

Architectural jewels, bearing the names of emperors of the Austro-Hungarian Empire, gave witness to the last golden age of Europe’s spa culture, when a mystical destination on the Transylvanian border could draw people from faraway kingdoms to try its legendary medicinal waters. Doctors and high profile patients swore by the healing powers of the spas, convinced there was an appropriate mineral-rich spring for every ailment.

Grand hotels, casinos, bars and restaurants began to flourish near the springs, which became integral to genteel life and some of the earliest examples of modern tourist destinations. Whether afflicted by illness or not, the world’s elite flocked to the outreaches of central Europe to socialize, fall in love, find creative inspiration, attend cultural events and sport the latest fashions, all the while, living apart from reality. It charmed Empress Elisabeth of Austria, nicknamed Sisi, who made several visits during the 1880s to try to cure her rheumatism.

But time has not been kind to Băile Herculane. Two world wars, the Iron Curtain, and political upheaval have taken their toll. The beautiful buildings are still there, in genteel disrepair, and you can see them at Messy Nessy Chic.