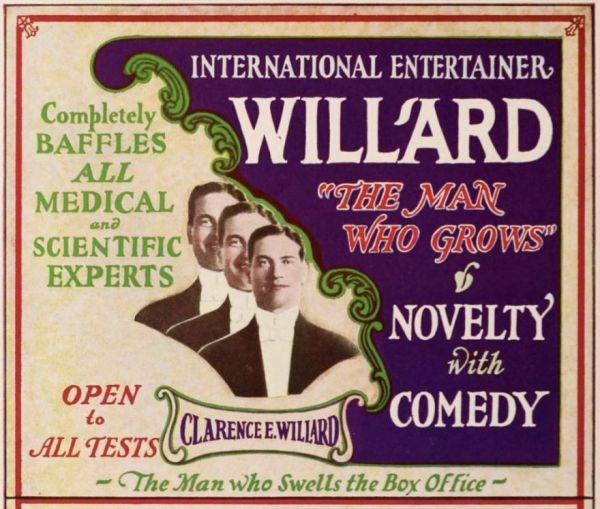 Before movies and television took over entertainment, anything unusual could be made into a show and taken on the road. Clarence Willard did just that, with a performance that consisted mainly up standing up straight. Willard toured with the Barnum and Bailey Circus, and later with Ripley’s Believe It Or Not.

While on stage, Willard would invite a volunteer from the audience to join him, usually someone taller than him. Standing next to each other, Willard would stretch himself until he stood taller. Willard was found that he could add seven and half inches to his natural height of 5 feet 10 inches simply by stretching. He was also able to extend the length of his arms by 8 to 15 inches and make one leg 4 inches longer than the other.

In the September 1927 issue of the Science of Invention, the magazine set out to explain how Willard grew on demand. Editors took x-rays of his spine and determined that his spinal curvature is “perhaps greater than that of the average man.”

Most people with spinal curvatures remain that way unless there is some medical intervention, but Willard learned to straighten and relax his spine by his own muscle power. Read the story of The Man Who Grows at Amusing Planet.

This Robot Can Paint Nails In Ten Minutes!

The Timelapse Made From 50,000 Photos

The Sculptural Lemni Armchair Is a 10 in Style + Comfort

The Warm Illuminance of Balmuda The Lantern