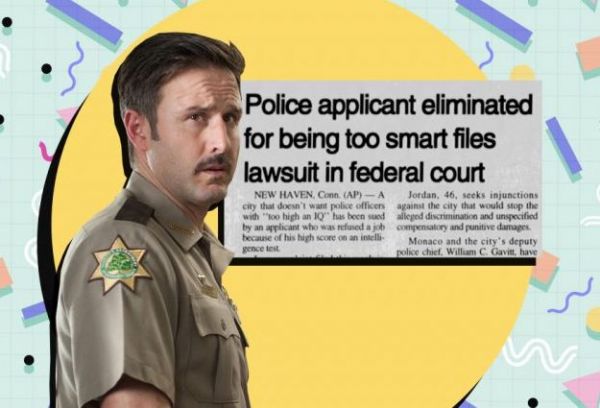 Mel magazine is running a series on the people and events of 1997, to celebrate the 25th anniversary of those things. One was a uniquely strange news blurb about a lawsuit that addressed valid legal and ethical issues, but at the same time implied that police departments were looking for recruits that weren’t too smart.

Robert Jordan applied for a job as a cop with the New London, Connecticut, police department. The process included taking a test to measure an applicant’s education and general intelligence. When Jordan was rejected, he thought it was because he was 46 years old, but found it was because he had scored a 33 on the test (the average police officer scored 21). The department claimed they rejected him because they thought people who scored that high would be bored by the job and not stay long. Sp Jordan sued the city for discrimination.

However, the condensed news items about the lawsuit that went nationwide left the public with the impression that police departments wanted dumb police officers for one reason or another, which became a permanent meme. People still argue about that. Read what really happened, and how the courts ruled in the case at Mel magazine.