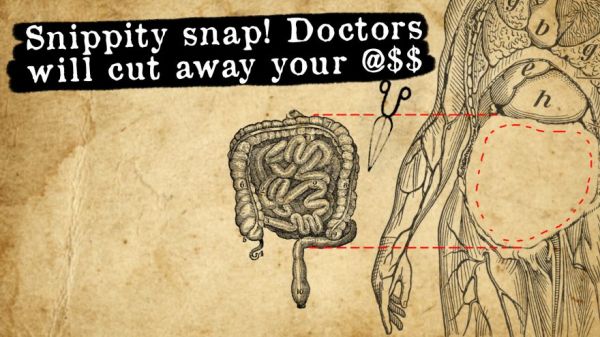 The history of medical science is full of theories that might appeal to one’s common sense, but didn’t hold up over time, and came to be seen as downright crazy in hindsight. One of those ideas became a trend in the early 20th century. People have long been disgusted by the colon, because it contains feces, which was seen as dangerously unhealthy. Doctors and laypersons alike treated this with enemas for a long time, then laxatives. When anesthesia made surgery a lot easier, one doctor came up with the idea of cutting the whole thing out, to keep our wastes from infecting the rest of our body. Eminent London surgeon Dr. William Arbuthnot Lane developed the radical colectomy, in which the large intestine was remove, and the small intestine was connected directly to the anus.

The radical colectomy caused a sensation, with patients flocking in their hundreds to Lane’s surgery to undergo the new cutting-edge procedure. From the 1910s to the 1930s thousands of Britons and Americans had their perfectly healthy colons snipped out as a preventative measure, with Lane himself performing over a thousand such procedures over the course of his career.

You can imagine this caused problems, particularly a 30% death rate due to postoperative complications and infections. But he wasn’t the only doctor to try removing a possible source of future infection. Surgeries were developed to remove healthy teeth, testicles, ovaries, spleens, stomachs, appendixes, gall bladders, and cervixes, in addition to colons. More research eventually went into these organs, and such radical surgery died out. Or did it? The removal of healthy tonsils was fairly routine for children through the end of the 20th century, and even today doctors are warning against routine but unnecessary circumcisions and wisdom tooth removal. Read about the story of the radical colectomy and the other surgeries that followed at Today I Found Out.