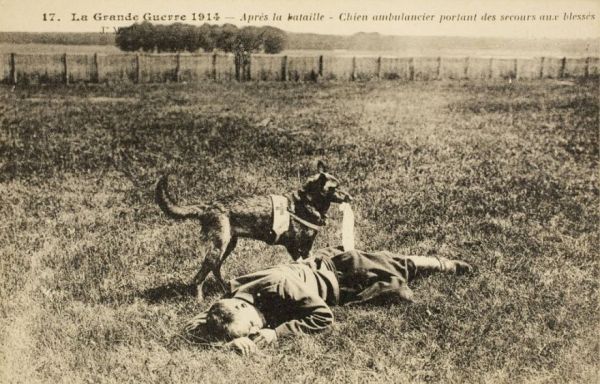 Working dogs will venture into spaces that humans consider too dangerous. Whether this is due to extraordinary bravery or ignorance of the actual danger, you can’t say that the dogs of war aren’t brave in their own way. They’re also loyal and hard-working. Dogs were first trained to find wounded soldiers in the late 19th century, but came into their own in World War I.

During World War 1, mercy dogs were trained by national Red Cross societies to serve the country in which the specific society operated. A typical mercy dog was equipped with a saddlebag containing water, alcohol, and first aid supplies, which a wounded soldier could use to tend to his wounds. The dogs were trained to move silently around no man’s land, usually at night, sniffing out wounded soldiers, ignoring those belonging to the other side. The dogs were smart enough to recognize and differentiate between slightly wounded men and soldiers who were beyond help. Their mission was to alert the troops back at the camp that a man who had a chance of survival was lying in the battlefield waiting for help.

Mercy dogs are credited with saving thousand of lives during the war. Some were awarded for outstanding service. Read about the mercy dogs of World War I at Amusing Planet. -via Strange Company