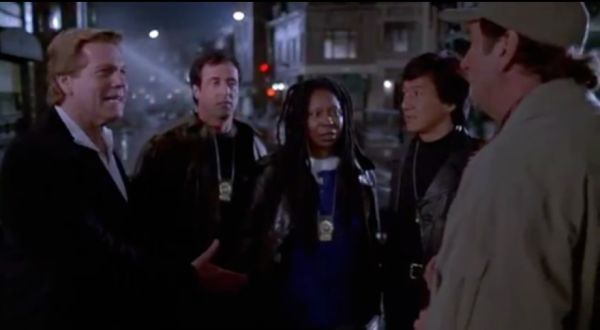 We’ve posted about Alan Smithee, a movie director who doesn’t exist, but manages to get credit for a lot of them. It’s a pseudonym for directors who don’t want their named attached to a film they’ve just directed. To catch up on the concept, read the explainer here.

In 1997, there was a movie that hopped onto the Alan Smithee joke big time. A movie named Trio starred Sylvester Stallone, Whoopi Goldberg, and Jackie Chan. It turned out to be awful after the studio recut the footage, so the director wanted to disown the movie. However, Trio isn’t a real movie, but rather a movie-within-a-movie. The director, played by Eric Idle, couldn’t take his name off the movie because his real name actually was Alan Smithee. Are you still with me? This was the premise of a comedy titled An Alan Smithee Film: Burn Hollywood Burn.

The movie was so awful that it returned $52,850 on a $10 million budget, and won five Razzies. It was so awful that the Directors Guild of America changed their rules about crediting a movie to Alan Smithee. If you are still confused, read the more in-depth version of this story at Cracked.