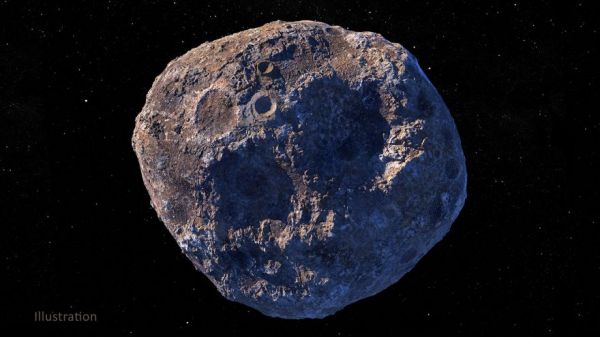 NASA’s Psyche mission is scheduled to launch on August of 2022 and head toward a 140-mile wide asteroid named 16 Psyche. It lies in the asteroid belt between Mars and Jupiter. Scientists are interested in the asteroid because they believe it may be a planetesimal, which resembles the earth underneath its mantle and crust. We could learn about how our planet formed. But the asteroid is interesting for something else.

Asteroid 16 Psyche reflects light in a way that lead scientists to believe it is made of metal, or at least contains a lot of iron, nickel, and gold. The resources on the asteroid could be worth as much as $10 quintillion! And now you’re thinking of the movies Armageddon, Avatar, Prospect, or Alien, in which earth’s biggest corporations send crews to other planets to extract their natural resources. While that may be a long way off, 16 Psyche has captured NASA’s imagination for many reasons, which you can read about at Smithsonian. -via Fark