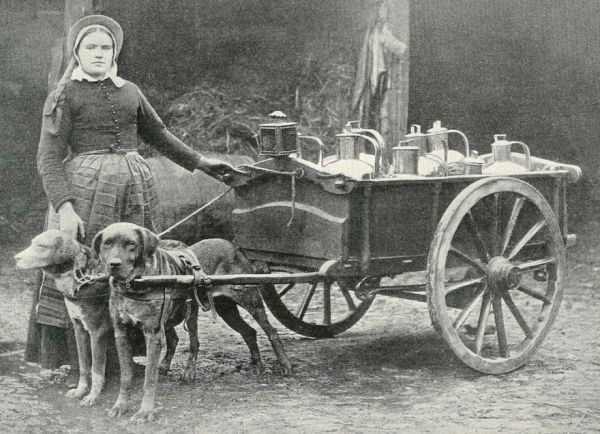 There was a big gap between the time communities developed specialized labor to the time of refrigerated transport. In between, dairy farmers had to get creative in order to deliver their goods to customers before it spoiled. Ian Spellerberg collects antique milk cans, and knows a lot about that history. He has milk cans from 20 different countries, and his book, Milk Cans: A Celebration of Their History, Use, and Design, has just been released in the US.

Naturally, Spellerberg also devotes a fair amount of his book to the myriad ways in which milk cans were moved from Point A to Point B. He begins with a section on “manual” transport, beginning with the milkmaids of 18th-century England and Europe, who carried unlidded cans on the ends of yokes like beasts of burden. It’s thought that milkmaids carried more than 100 pounds around their necks, several miles, every day. By the 19th century, milkmen had largely replaced milkmaids, but concurrently, the manual transport of milk was itself being replaced by carriages, carts, and customized hand trucks, each of which was designed to hold particular styles, sizes, and shapes of milk cans so that they could be rolled easily through the streets. Sometimes these devices were pulled by humans, sometimes horses provided the literal horsepower, but there are also examples of milk-can carts being pulled by harnessed dogs.

As the means of moving milk cans improved, the size of the cans increased, reaching peak milk can, if you will, around 1867 with the railway milk churn, which takes the last part of its name from its resemblance to traditional wooden butter churns. Railway churns were wider at the bottom to make them less susceptible to tipping over and spilling their 17 gallons of liquid, which, Spellerberg tells us in Milk Cans, is equivalent to 8 “barn” gallons or 68 quarts. However you measure it, when you add in the weight of the metal churn itself, a full railway churn weighed as much as 150 pounds. To move this milk-filled monster, dairy and railway workers alike would “reel” the churn by grabbing its top or handles and turning it on its bottom edge rather than lifting it.

Read about the history of milk delivery and see milk cans ranging from 25 gallons down to an eighth of a pint, at Collectors Weekly.

Rating The Milky Way: Back in the Day, Milk Cans Delivered Dairy From Cow to Consumer is 5.0 / 5 Votes: 4
Please wait...
Loading...
Related articles