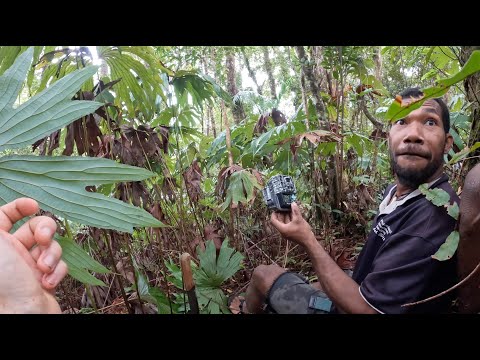 The black-naped pheasant-pigeon is a rarely seen bird. Scientists documented a sighting in 1882, but since then, only locals on Fergusson Island in Papua New Guinea have seen the bird they call “auwo,” and those sightings were decades ago. The pheasant-pigeon was thought to be extinct. But a team of scientists from the Papua New Guinea National Museum, the Cornell Lab of Ornithology, and the American Bird Conservancy spent a month setting up camera traps in the mountains of Fergusson. It was two days before their scheduled exit when the bird was discovered to have been recorded on a camera trap, 3200 feet up a ridge. Jordan Boersma recorded the moment he recognized the bird in the camera trap’s footage and showed it to his colleague Doka Nason. This is the moment that ornithologists (and all wildlife biologists) live for. The black-naped pheasant-pigeon is now listed as critically endangered. This video contains NSFW language.