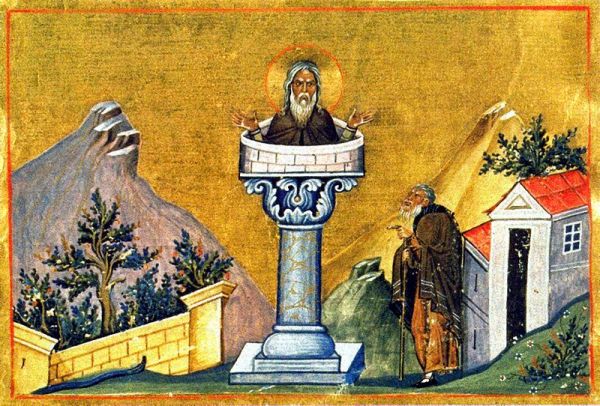 During the days of the Byzantine Empire, monks who gave up a normal life for their Christian faith sometimes appeared to compete over who could sacrifice the most or even punish themselves the most. Simeon Stylites the Elder was a pioneer in self-deprivation. Born around 390 AD in Syria, he entered monastic life as a teenager. He became an ascetic, going weeks without eating to purify himself. He was so extreme that he was asked to leave the monastery, and went to live a hermit’s life alone atop a series of pillars. The first one was three meters tall, but he found taller places to sit and stay. Simeon settled on a pillar that was 15 meters tall and stayed there 37 years! His living space was a platform of about a square meter with a railing of sorts. Simeon was only brought down after his death.

Some of Simeon’s followers also tried living up on a pillar, and they became known as stylites, or pillar hermits. The practice lasted until the Middle Ages, at least in its extreme form. Read about Simeon Stylites the Elder and his pillar home at Amusing Planet.