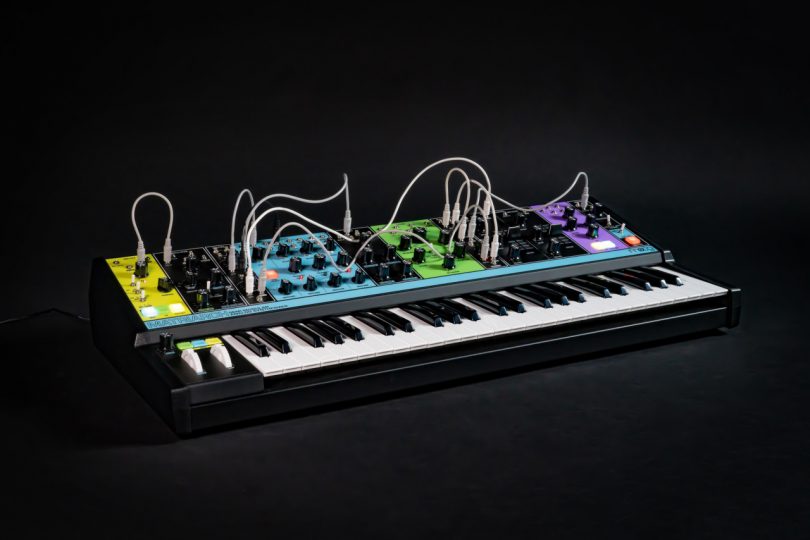 Moogfest, an eclectic music, art, and technology festival, descends upon Durham, North Carolina each year to envelope the city with four days of concerts, panels, talks, and workshops orbiting the who, what, when, and how of Moog synthesizers history. The festival also provides an ideal annual occasion for the Asheville-based company to announce their latest products, and this year proved no exception, with the unveiling of an instrument bearing a name that clearly states its place within the Moog lineage. 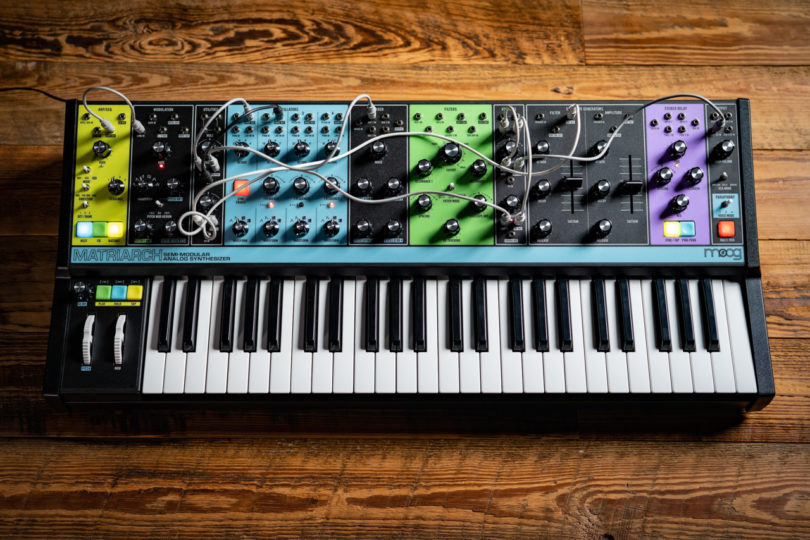 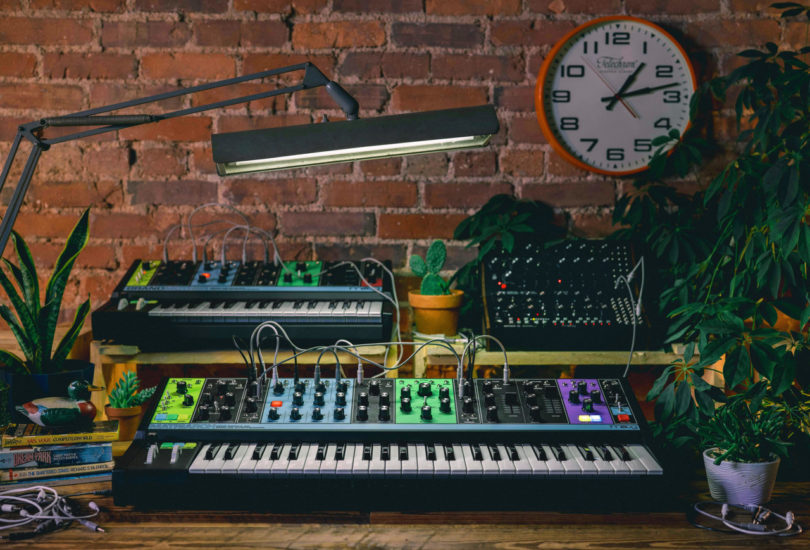 The Moog Matriarch is a 4-oscillator paraphonic analog synth featuring modular connectivity and analog circuitry based upon classic Moog synthesizer modules designed by the company’s namesake himself.

Checking over the spec sheet, the Matriarch could be considered the greatest hits of Moog know-how come to form – an artful amalgamation of the synth company’s history expressed with mixers, filters, VCAs, oscillators, and other componentry that have given the 66 year old company a rarefied reputation amongst musicians. With 49-keys spanning most of the instrument’s 32-inch width, the four-voice paraphonic synth is equipped to provide an array of options via its built-in sequencer, arpeggiator, 90 modular patch points, stereo analog delay and stereo ladder filters. Its sum is what Moog calls the “pinnacle of Moog’s semi-modular family”. Oh, and the Matriarch also happens to be one bad mutha of a keyboard playable straight out of the box. 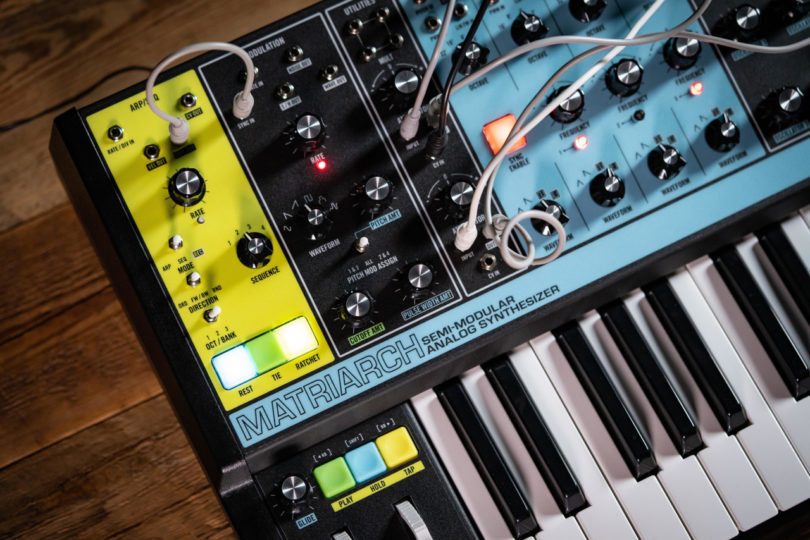 The Moog Matriarch’s design is unapologetically retro in the color and typography department, with much of the layout color-coded for easy navigation, a design strongly indebted to the Moog Grandmother. Both synths undeniably bring back memories of a certain “root down” era. 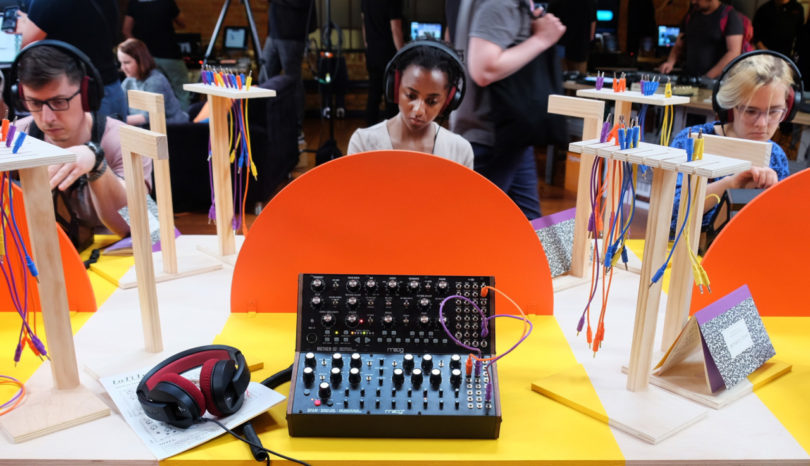 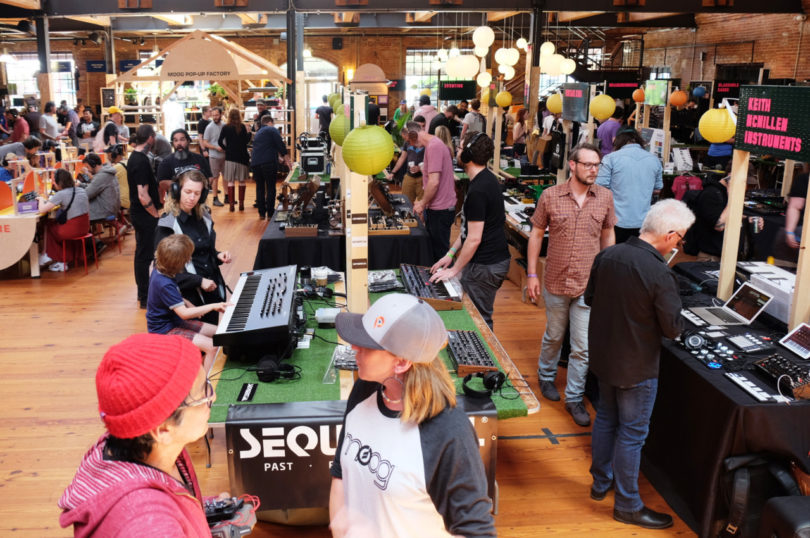 Describing Moogfest simply a music festival seems a bit of a misnomer. As much as it is a music fest, it’s also operates as trade show with numerous vendors with Moog-related gear on display and for sale. Hands-on demos are not only permitted, they’re enthusiastically encouraged, no matter the age of attendee. 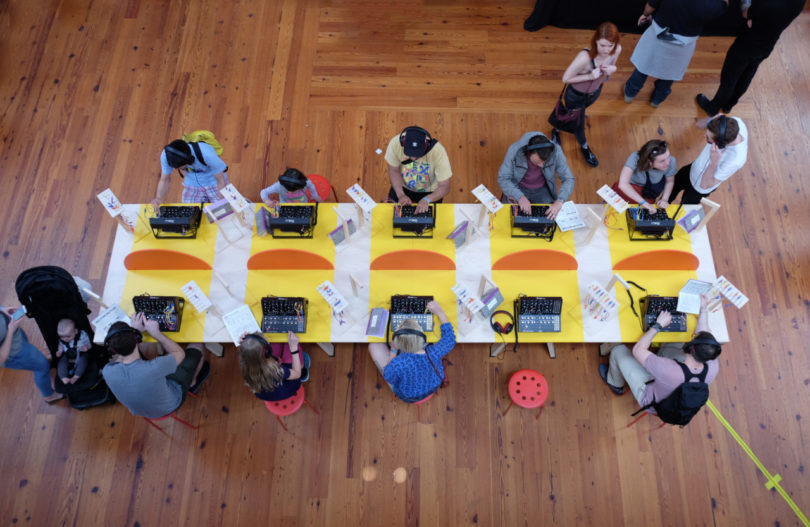 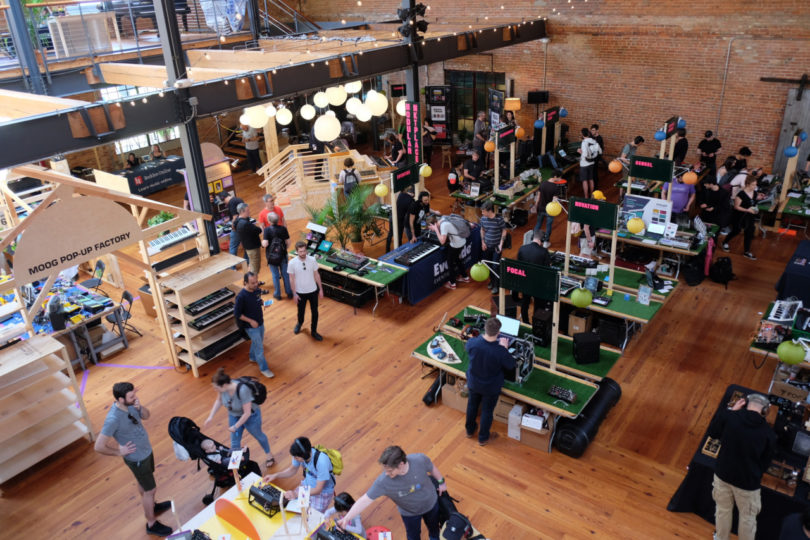 Moog’s own small, but intensely dedicated team is responsible for designing and constructing the array of interactive displays erected in around the Moog Pop-Up Factory. Photos: Gregory Han

Between musical sets performed by a wide spectrum of artists spanning a polyphonic spree of genres, a number of attendees sign up for multi-day, workshops giving participants hands-on opportunities to assemble (and even solder) componentry into their very own special edition Moog synth. Conceived every year by Moog Music’s Hardware Team Leader, Steve Dunnington, this year’s exclusive and limited edition synth was the Moog Spectravox, a vocoder and spectral modulator capable of converting the voice into a close approximation of a robotic accent more prominently heard in the late 1970s. 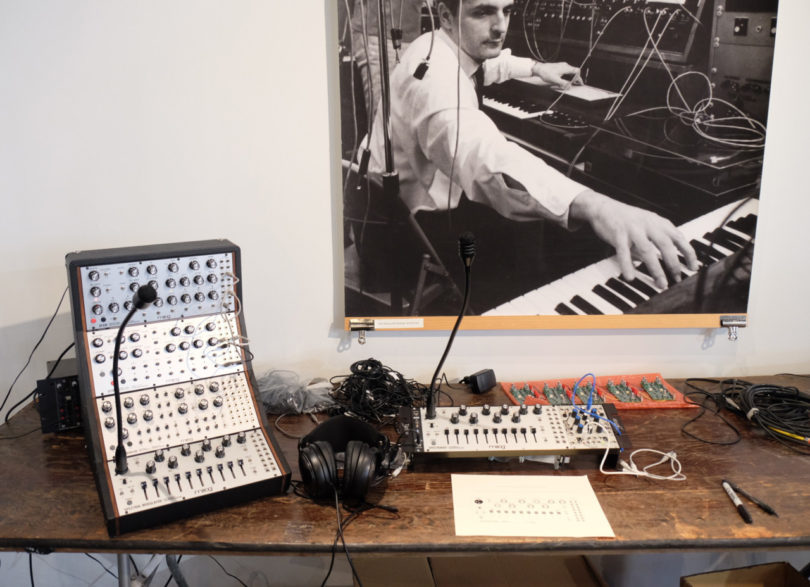 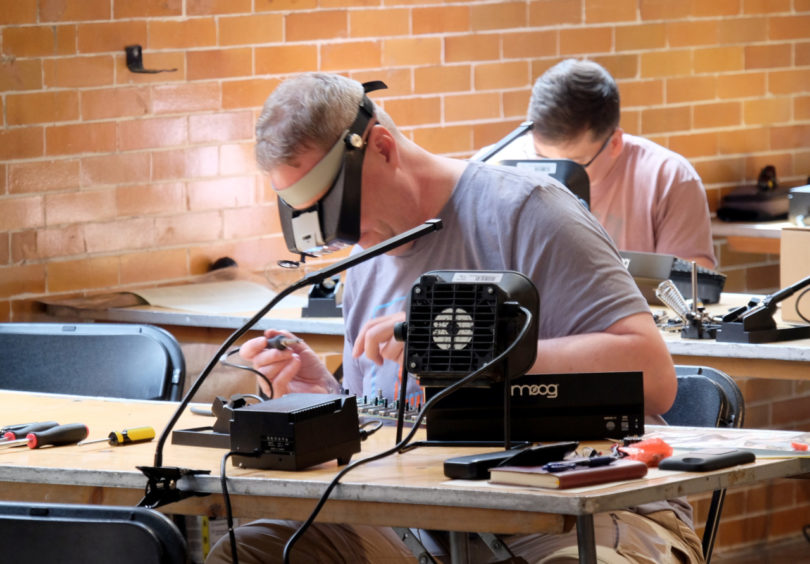 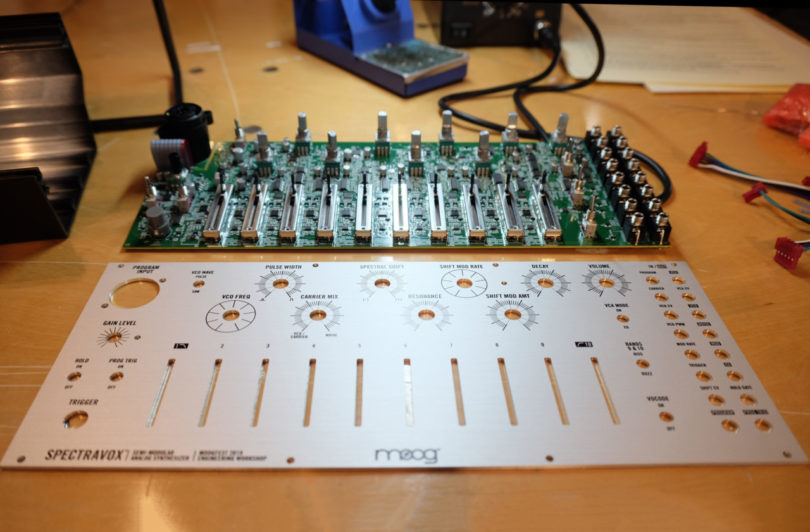 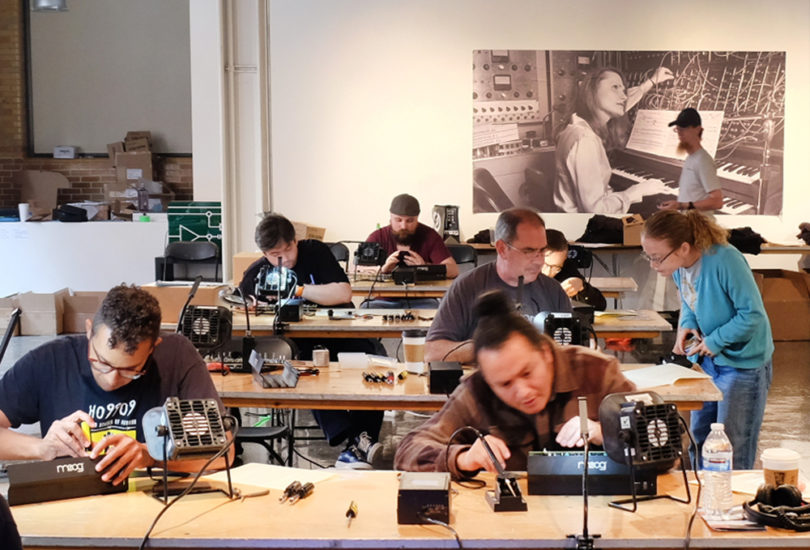 The Moogfest Engineering Workshop is welcoming to all levels of technical proficiency, with numerous Moog employees on hand to guide – patiently and enthusiastically – participants through the assembly process of their very own synth. 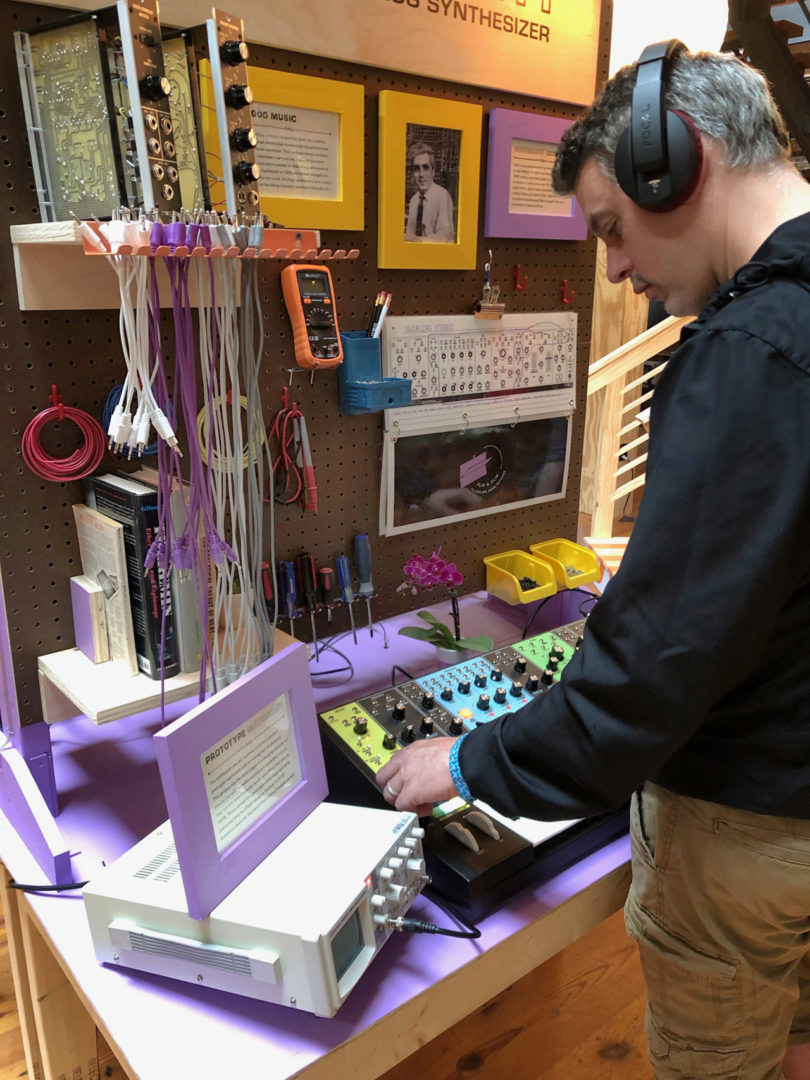 Finally, Moogfest not only offers the opportunity to catch live musical performances within intimate venues, it offers the possibility of catching a favorite musician out in the wild catching an act or perusing wares. Such was the case when we met Moogfest headliner, Mark Ramos Nishita, aka Money Mark, out on the floor of the Moog Pop-Up Factory.

“I’m seriously thinking of getting another Matriarch before heading back home,” the former Beastie Boys cohort with the who’s-who resume (and part-time inventor) confides before sharing more about his enthusiasm for this latest release, “My electric keyboard setup for live shows is classically six or seven different keyboard sounds: electric piano, organ, clavinet, poly-synth and a hot sounding mono synth.”

“Out of this 100 years of electric and electronic keyboard designs I use, only a few I would consider instant classics. I’m ready to put the Moog Matriarch up there, because it’s as intuitive to use as the Mini-Moog and is just as powerful (and also beautiful). And the faceplate is finished in kids colors, which makes it seem like the Matriarch should be in every grade-school classroom. And it should be! ” 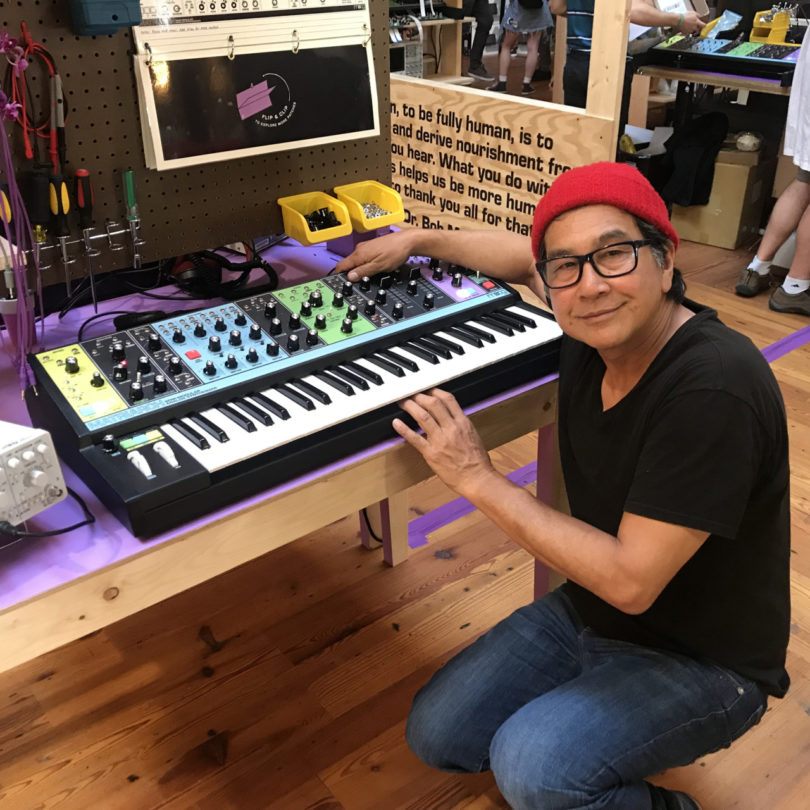 Moogfest headliner Mark Ramos Nishita, aka Money Mark, eyeing another Matriarch to add to his collection.

“But most important, this is a super fun keyboard to ‘play’. It ends up being a great [music] writing keyboard because of its paraphonic quality.”

A fitting sentiment, noting founder Robert Moog considered himself first and foremost an engineer/toolmaker motivated  to “design(s) things that other people want to use.” By the sound of things, it seems that hope has been realized many times over and yet again in spirit by the Matriarch.