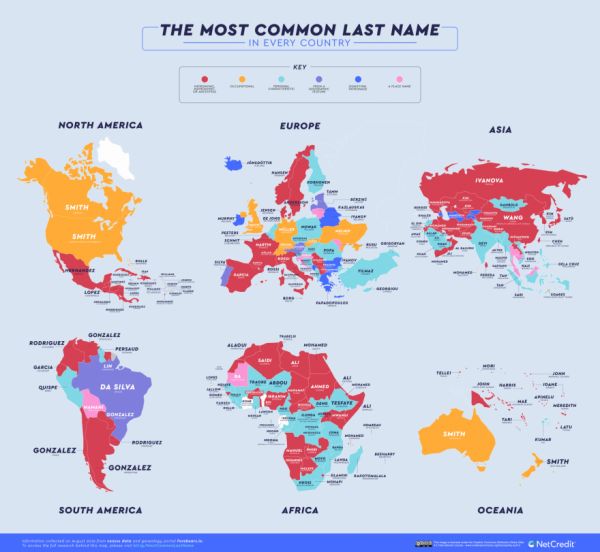 The map above shows the most common surname, or family name, in each country of the world. It’s labeled as “last name,” although some language conventions put the family name first. The most common family name in the world is Wang, which is used by 76 million people around the world, and is the most common name in China. Translated from Mandarin, it means “king.” The names on this map are color-coded by type: patronymic or ancestral, occupational, personal characteristic, signifier of patronage, or a place name. Across major English-speaking nations, the most common name is Smith, which has an occupational origin. In Iceland, the most common surname is the patronymic Jónsdóttir, meaning daughter of  Jón. That tells us there are more women than men in Iceland, because a brother in the same family would be named Jónsson. It also hints that Jón may be Iceland’s most common first name. Read more about the map at its source, Net Credit, and enlarge it greatly here. -via Digg

Rating The Most Common Surname in Every Country is 5.0 / 5 Votes: 5
Please wait...
Loading...
Related articles