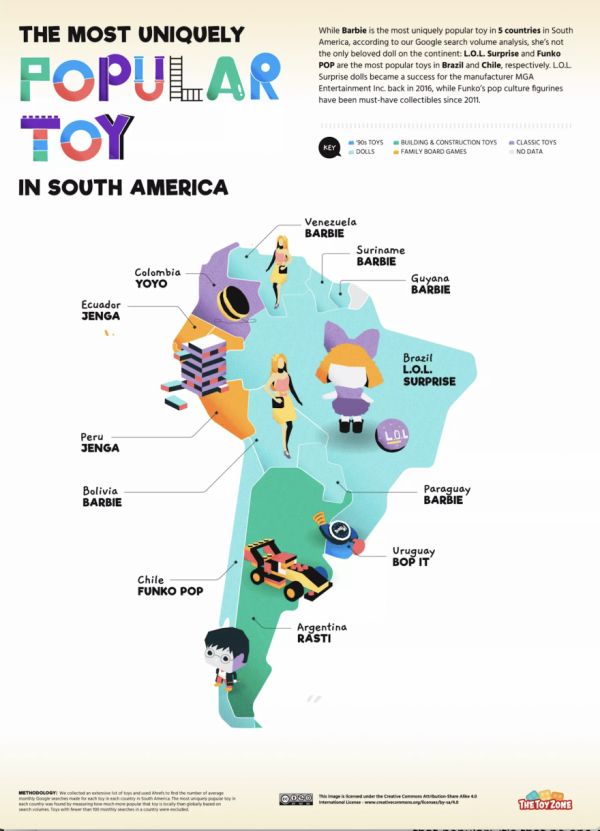 You might look at these maps and think, “come on now, there couldn’t be that much variety in which toys each nation likes best.” And you’d be right. The clue is in the title here. Last year, ToyZone made maps of each nation’s most popular toy, and the results were about what you’d expect- game consoles ruled the world, with a few places preferring Barbies or LEGO. That might be accurate, but it makes for a boring map. In their map this year, they gathered the data on the toys with the most Google searches in each country, and then compared each answer with the popularity of toys in surrounding nations. So while these toys are popular, the “uniquely” part comes in when a toy is searched more in one nation than the others. That’s why Lincoln logs are the toy mapped for the US. It’s not that Lincoln Logs are all that popular; it’s that no one else in the world plays with them. The rest of the world buys LEGO, Duplo, or Nanoblock building toys.

Personally, I think these maps would be more useful if they were broken down into age groups, but that’s difficult when your research consists of analyzing Google searches. There are world maps of toys broken down into categories, such as dolls, building blocks, board games, and video game consoles. See the maps for each continent, category, and the world at Toy Zone. -via Metafilter