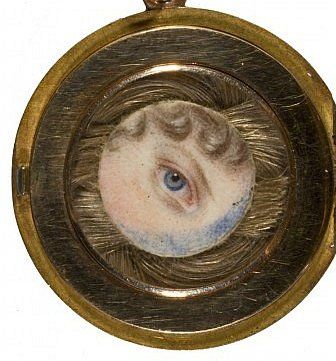 Prince George of Wales, who later became King George IV, fell in love with Maria Anne Fitzherbert. The couple could not officially marry because she was a Catholic. But he begged for her hand anyway, and in 1785 sent her a tiny painting of his own eye. She later gave him a portrait of her own eye, set into a locket. The small gifts were perfect to carry around and remind each of the lover they were separated from. This was the beginning of “lover’s eye jewelry,” a trend that lasted until the advent of photography fifty years later.

As objects, lover’s eyes are mesmerizing—and bizarre. Part-portrait, part-jewel, they resist easy categorization. They’re also steeped in mystery: In most cases, both the subject whose eye was depicted and the artist who painted it are unknown. What’s more, until the early 2000s, little had been written about the objects’ history and significance, though they have been part of the collections of museums like the Cleveland Museum of Art, the Philadelphia Museum of Art, and London’s Victoria and Albert Museum. Big questions loomed: What sparked their popularity? Why had they faded so quickly from use? And why portray a single eye, as opposed to a whole portrait?

Well, we know the power of eye contact. Read about lover’s eye jewelry and see some beautiful examples at Artsy. -via Everlasting Blort