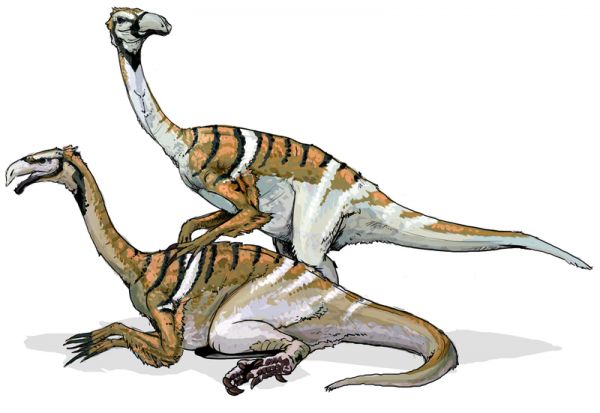 All we know about dinosaurs is what we can see in their fossils. And we haven’t yet found a fossil showing dinosaurs having sex in the last moments of their lives. But they must have mated, since they reproduced. Still, it’s difficult to imagine, what with those armored plates and horns and thagomizers and… well, it might have been like that old joke, “How do porcupines have sex? Very carefully!” Anyway, while scientists don’t know much about dinosaur sex, they have figured out a few parts of it.

Thanks largely to the discovery of once-controversial feathered fossils from China in the 1990s, we now know that birds are the only living relative of dinosaurs — specifically, therapods, part of the same family as T. rex and Velociraptor.

“You go back 20 or 30 years, and you still have scientists saying birds aren’t dinosaurs, but now we have so much more evidence that they are. So you can look at the behavior of birds and work out how some of these dinosaurs behaved,” Lomax said.

Case in point is a type of scratching that male ground-nesting birds do to signal they are strong and good nest builders. It’s part of behavior called lekking, when males, typically in groups, competitively dance and perform other courtship rituals to attract the attention of females.

Dinosaurs engaged in similar mating behavior, according to fossilized “scrapes” left behind in 100 million-year-old rocks in the prehistoric Dakota Sandstone of western Colorado. One site revealed more than 60 distinct scrapes in a single area of up to 164 feet (50 meters) long and 49 feet (15 meters) wide.

There’s more, and it gets more explicit, at CNN. -via Fark

Resin-Fossilized and Machine-Cut: The Art of Matthew Angelo Harrison

How the Cessna Hacienda Set a World Record