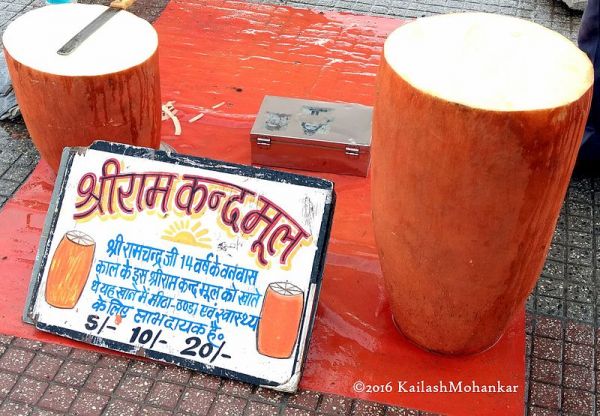 Barkha Kumari encountered a street snack in India that intrigued her. The vendor was cutting paper-thin slices off of what looked like a log, but was obviously softer. This was Ram Kand Mool. But what kind of a plant did it come from?

“It’s a root. It can grow five feet deep and 300kg,” he explained, in response to my shock. He sources it, he said, from the neighbouring state of Kerala, from people who “get it from the forests.” He hasn’t seen anybody extract the root, but has seen the tree it comes from. “It’s like a climber. It gives flowers. It grows near the sea. It’s called Bhoochakara Gadda in south India and Ram Kand Mool up north.”

Can a root be this massive? Especially the root of a climber or vine? Before I could ask Google, my snack was ready. It was seasoned with salt, chili powder, and lime; my husband’s had sugar and lime. It was crunchy, juicy, and refreshing, but had no taste of its own.

The snack sent Kumari down a rabbit hole trying to identify the plant that this food came from. She quickly figured out that the vendor, and others, either did not know or did not want to divulge the exact source of the “root.” So she consulted food scientists and botanists, who did not know, either.

Soon enough, I’d learn that my idle curiosity was, in fact, a mystery that has baffled and, at times, infuriated botanists for decades. This snack has been widely sold on the streets for decades—from the city of Haridwar in the north to Pune in the west and in several places in the south—and yet, somehow, no one seems to know what it is.

But Kumari kept searching and asking questions. She may have found the answer, but there are always more questions, which you can read about at Atlas Obscura.

The Feminist Revival of Embroidery

Dreaming With Homer on an Idyllic French Island