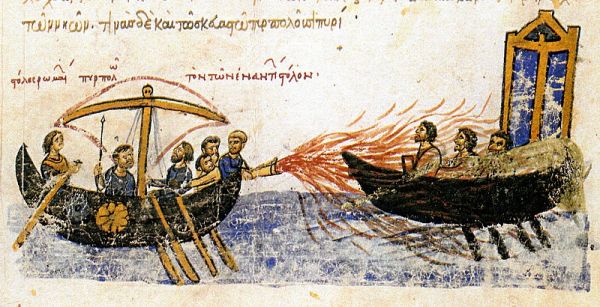 Victory in warfare often goes to the entity that develops the most horrendous weapons, as we all learned in 1945. But mysterious but horrifying weapons that you wouldn’t expect abound in history. In the 7th century, Byzantine warfare included the use of what appears to be a flamethrower! This weapon was called Greek fire.

The chief method of deploying Greek fire was by projection through a tube called a siphōn, which was placed aboard ships or on siege engines called cheirosiphōnes. A handheld portable siphōn was also invented that is the earliest analogue to a modern flamethrower. Byzantine military manuals also give mention of Greek fire filled jars, caltrops wrapped with tow soaked in the substance, and cranes called gerania that would pour Greek fire onto enemy ships.

The Byzantines ascribed the discovery of Greek fire to “divine intervention”, for which the Emperor Constantine Porphyrogennetos (AD 945–959) would later account in his book De Administrando Imperio to never reveal the secrets of its composition, as it was “shown and revealed by an angel to the great and holy first Christian emperor Constantine” and that the angel bound him “not to prepare this fire but for Christians, and only in the imperial city.”

There are accounts of what went into Greek fire, but they must have not been too helpful, because the technology was eventually lost. Read about Geek fire at Heritage Daily. -via Strange Company

The Fascinating World of Whale Barnacles

Getting to Know an Overlooked Pioneer of Bay Area Abstraction

Not Quite the Wifredo Lam Show That’s Needed Now

Why We Need Prizes for Digital Art

Why Movie Dialogue Has Become So Difficult to Understand