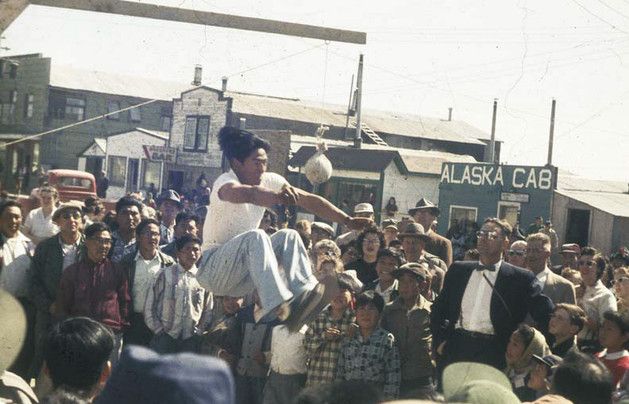 Pictured above is a Native Alaskan participating in a high kicking contest from 1950. The object is to kick a leather ball hanging from several feet off the air. The ball is gradually raised until only the winner is able to reach it. The Smithsonian Institution describes the legend that led to this sport:

High-kick competitions were once part of Kivgiq, the Messenger Feast. As each man entered the qargi he tried to kick an inflated animal bladder or ball suspended from the ceiling. An Iñupiaq story tells of a young woman who owned two balls; the larger was the sun, and the smaller the moon. The sun ball fell (or in one version was dropped by Raven) and burst open, bringing light to the world. The circular designs seen on this ball represent the sun and commemorate this ancient story.

-via Weird Universe | Photo: University of Alaska at Fairbanks Archives