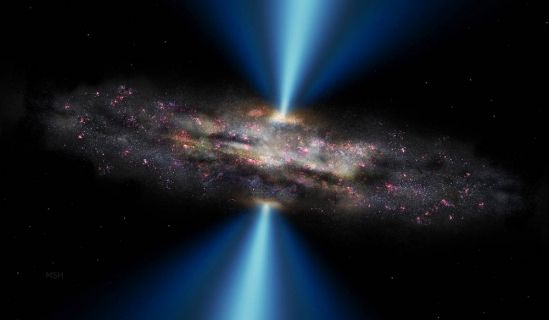 At the center of certain galaxies are objects with intense brightness that they outshine the rest of their respective galaxies by four orders of magnitude. Over the past several decades, our understanding of these active galactic nuclei has progressed much. However, debates centered on the identity of some of these objects emerged recently.

Recently, a group of researchers have resolved some questions and have found exciting findings about these cosmic phenomena. Their results can be seen in the Monthly Notices of the Royal Astronomical Society.

Quasars, the most powerful active galactic nuclei, shine like lighthouses from their home galaxies. These beams are powered by supermassive black holes millions to billions of times the mass of the sun. “The [radius of this] black hole is 1/10,000th of the distance just to our nearest star, and yet it can produce the power of 10,000 entire galaxies,” said coauthor Robert Antonucci, a physics professor at UC Santa Barbara.

The gas around these black holes spins so fast that the color of the light it emits is stretched out. The material approaching us appears bluer, while receding gas appears redder. This stretches the normally sharp spikes in the light spectra into broad peaks.

The radiation from these systems also energizes distant gas clouds, which are less dense. Because these clouds rotate more slowly, the peaks in their light emission stay sharp. And because they are less dense, the atoms have enough time to make slower transitions between energy states without interference from neighboring atoms, so scientists see additional spikes that are due to heat rather than radiation.

A dim quasar is called a Seyfert galaxy, and the debate stems from the distinction between the two types of Seyfert galaxies. Type I galaxies produce both of these spectra, but the light from type II galaxies is missing the broad peaks. Before they knew about the black holes at the center, scientists had thought the two were different entities, and were puzzled over what could be powering them.

Know more details of this study over at The Current.