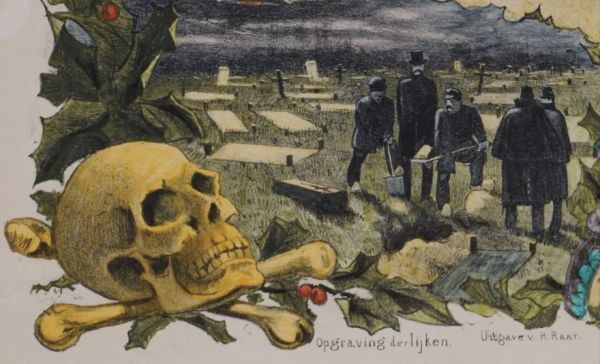 In the Dutch city of Leiden in the 19th century, it wasn’t at all rare for people to get suddenly sick and die. The city had no functioning sewer system, and outbreaks of cholera were common. In the poorer neighborhoods, people couldn’t even afford to consult doctors. The child death rate was particularly high. That’s why we will never known for sure how many local residents were killed by Maria “Goeie Mie” Swanenburg. She had earned the nickname “Goeie Mie” because she was so helpful to her family, friends, and neighbors- always willing to look after children or care for sick people or assist anyone needing help with cooking.

The 44-year-old Swanenburg was arrested in 1883 after a doctor became suspicious of one man’s illness. His wife and newborn had just died, but death in childbirth was common. Swanenburg’s past came out in the investigation. She was constantly buying arsenic, and had a history of buying life insurance on people who died soon afterward. Swanenburg was eventually convicted of killing 23 people, but is suspected of up to 100 murders. There were also victims who didn’t die, but suffered greatly. Read the case of Maria Swanenburg and the trail of dead people she left behind her at Vice. -via Digg