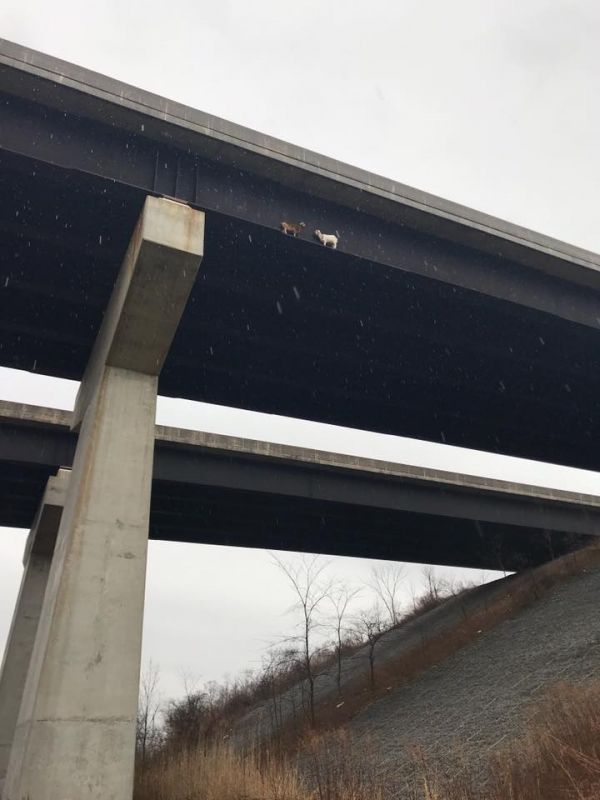 Last weekend, two goats were discovered to be in a predicament after they had walked out on a beam beneath the Mahoning River Bridge in Pennsylvania. They ran into an obstacle at about 200 feet into their adventure, so the brown goat turned around to go back.

The brown goat managed the trick. “He walked out to a concrete pier and somehow got himself turned around,” says Todd Tilson, operations manager in the maintenance department of the Pennsylvania Turnpike.

The white goat did not manage to turn around.

That’s why, in the photo, you’ll see the two goats facing each other.

Tilson reports that the brown goat “kept hitting the white one with its head” to make it walk backward. “It would take one step, two steps back, then stop,” he says.

And really, can you blame it? Would you want to walk backward on a beam that is about 8 inches wide and 100 feet above the ground?

The owner of the goats said they were there 18 hours, resembling the Dr. Seuss tale of the North-Going Zax and the South-Going Zax. The Pennsylvania Turnpike staff borrowed a crane from the Pennsylvania Department of Transportation. But could they gets the goats down without spooking them into falling? Read about the dramatic goat rescue at NPR. -via reddit