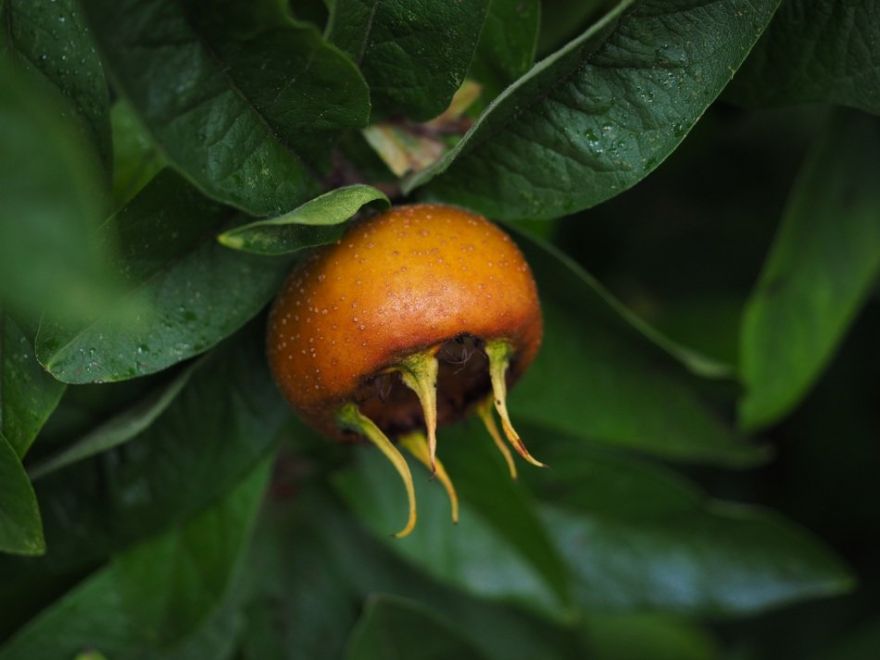 The Mespilus germanica was known as the “open-arse” due to its shape, resembling an anus opening to extrude its contents. Although extremely rare today, this fruit was loved in Medieval Europe, in part because it bloomed during the winter. Thus it was one of the few sources of sugar available to eat during the winter. But Europeans didn’t eat it right away. The medlar, as the fruit is called today, becomes edible only after it has rotted for a few weeks. BBC describes this lost, beloved foodway:

When they’re first picked, medlars are greenish brown and resemble oddly-shaped onions or alien-looking persimmons. If they’re eaten straight away, they can make you violently ill – one 18th Century doctor and botanist said that they cause diarrhoea. But if you put them in a crate of sawdust or straw and forget about them for several weeks, they gradually darken and their hard, astringent flesh softens to the consistency of a baked apple.

The exact chemical mechanism involved remains elusive, but broadly, enzymes in the fruit break down complex carbohydrates into simple sugars such as fructose and glucose, and it becomes richer in malic acid – the main culprit behind the sour taste of other fruits such as apples. Meanwhile, harsh tannins, which contribute to the bitter astringency of younger red wines, and antioxidants such as ascorbic acid (Vitamin C), are depleted.