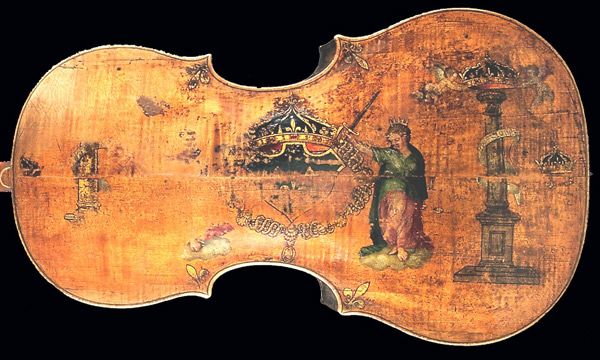 Meet the ‘King’ cello, the oldest known cello in existence. The instrument was created by Andrea Amati in the mid-1500s for the court of KingCharles IX of France. The violin was part of a set of stringed instruments painted in the style of Limoges porcelain. In addition, it also one of the few Amati instruments in existence:

The instrument remained in the French court until the French Revolution, after which the basso fell out of favor and the “King” was “drastically reduced in size” through an alteration process that “stood at the forefront of musical instrument development during the last quarter of the 18th century and throughout the 19th,” a way transform obsolete forms into those more suitable for contemporary music. “By 1801,” Zeller writes, “the date that the ‘King’ might have been reduced, large-format bassos were obsolete, discarded in favour of the smaller-bodied cellos.”