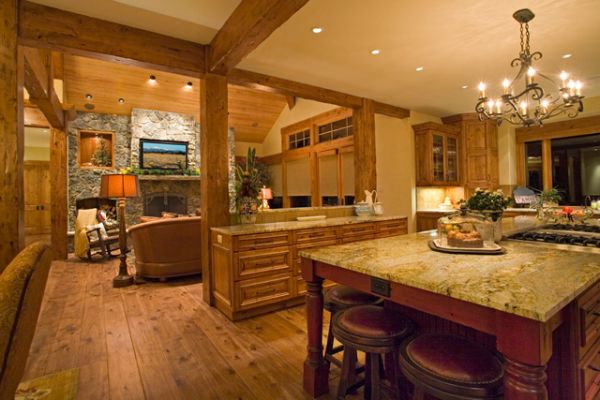 American architecture introduced the open floor plan home around the turn of the 20th century, and now it is pretty much expected in new homes, where one large room combines the functions a kitchen, living room, and dining room. First, the kitchen and dining room were combined. By mid-century, open floor plans became synonymous with modern home architecture, bringing families together, facilitating supervision, and besides, it was great for entertaining.

Prosperity rose during the 1960s. The housing industry became more powerful, and many families had enough money to trade up from their wartime houses—especially white, middle-class families who had been able to build wealth through home equity. They developed greater ambition and wanted more space. As the small, modernist middle-class home of the 1930s through 1950s gave way to larger designs of the late 1960s and onward, the great room emerged, often with a vaulted ceiling exposed to high windows or a second-floor gallery. And so, the total space and activity the open-plan homeowner had to manage from behind the kitchen increased ever further. The kitchen became like a ship’s bridge, but absent the personnel to run the vessel.

Openness and continuity might have been modernist aspirations for the spirit as much as the body, but just as the open-plan office created the oppression of constant oversight in the name of collaboration, so the open-plan home merged the duties of hostess, butler, cook, and childcare provider. And despite its promise of relaxation and conversation, open-plan living has actually combined leisure with labor. When the two fuse, work wins in the end, converting recreation back into obligation. The dinner party entails its preparation and cleanup; meal-prep also involves child oversight or homework help; television-viewing takes place during dishwasher-unloading. Overall, domestic life becomes an exercise in multitasking. And so, even when it expands freedom, the open kitchen constantly reminds its users of that freedom’s limits.

Do the benefits of an open floor plan outweigh the disadvantages? An entire family can be together in a great room without actually interacting with each other, but proximity does encourage interaction. Open floor plans are a great boon to those susceptible to claustrophobia. And it does make bringing food to the table easier. But it also enables dirt to spread through the house easier. Kitchen smells, heat, and grease are no longer confined to the kitchen. A sinkful of dirty dishes makes the entire living space look messy. You can’t control which spaces are heated or cooled separately. And what busy cook wants to be reminded that every other family member is relaxing in front of the TV? Read about the rise of the open floor plan and the backlash against it at The Atlantic. -via Metafilter, where you’ll find more links on the subject.

POLL: Do you prefer an open floor plan or separate rooms?