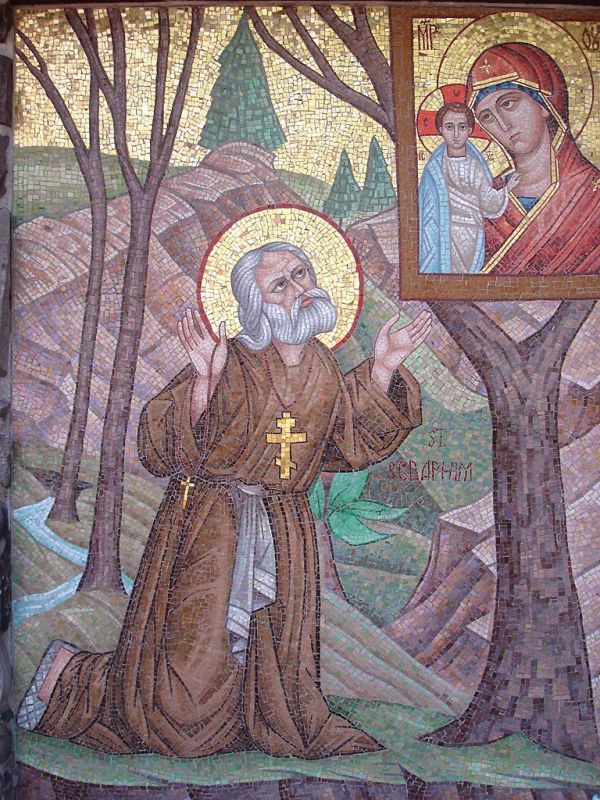 What kind of saint would you assign to be the patron saint of nuclear weapons? What could possibly be in such a person’s life that would make sense of such a designation?

Russian mystic and visionary Prokhor Moshnin was born in 1754. He joined a Russian Orthodox monastery and quickly rose through the ranks to become a leader. By then he was known as Seraphim of Sarov. Then while still a young man, he became a hermit and lived a mostly secluded life for the next thirty years. Eventually, he opened his doors to those who would come to find his wisdom. Seraphim died in 1833, leaving evidence of his mystic powers like unopened letters that he had already answered. The Russian Orthodox Church canonized Seraphim of Sarov, making him St. Seraphim, in 1903 in a ceremony attended by Tsar Nicholas II and Tsarina Alexandra.

However, the rise of the Soviet Union meant the Church was subsumed by the power of the state. The USSR developed a nuclear weapons program following World War II. With the fall of the Soviets in the 1990s, the Russian Orthodox Church came out of the shadows, and nuclear warheads (as well as nuclear submarines, tanks, and other nuclear devices) were blessed by a sprinkling of holy water in the name of Saint Seraphim of Sarov. Of course, Seraphim knew nothing of these weapons in his life. How in the world did he become associated with these things? Read the story of the patron saint of nuclear weapons at Esoterix. -via Strange Company