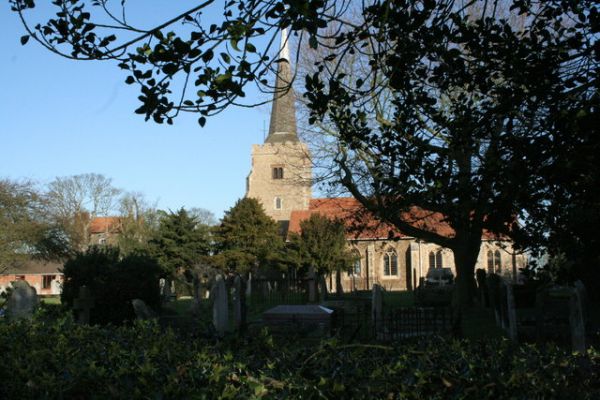 St. John the Baptist Church in Danbury, Essex, UK, was built in the 13th century and is the burial place of a few Knights Templar. One of the graves, in the floor of the church, was unearthed briefly in 1779, and an account of the disinterment was published in a magazine in 1789. It describes the discovery of a lead vault containing an elm coffin with a shell inside, and inside that, a corpse. The following excerpt may be disturbing for sensitive readers.

The magazine continues, “The lid of this shell being taken off, we were presented with a view of the body laying in a liquor or pickle resembling mushroom catchup…As I never possessed the sense of smelling and was willing to ascertain the flavour of the liquor, I tasted; and found it to be aromatic, though not very pungent partaking of the taste of catchup and of the pickle of Spanish olives. The body was tolerably perfect…The flesh, except of the face and throat appeared exceedingly white and firm…The body was covered with a shirt of linen; the stitches were very evident, and attached very strongly…There was no hair on the head, nor do I remember any in the liquor, though feathers, flowers and herbs in abundance were floating..the leaves and stalks of which appeared quite perfect.”

Read about the church, its Templar connections, and the pickled knight at MJ Wayland’s blog. -via Strange Company

For 60 Years, Indigenous Alaskans Have Hosted Their Own Olympics

How Tennis Star Naomi Osaka Handles the Pressure of Competition

What Art by Neanderthals Teaches Us About Our Own Gender Bias

In M. Night Shyamalan’s New Thriller, a Beach Rapidly Ages Anyone Who Visits