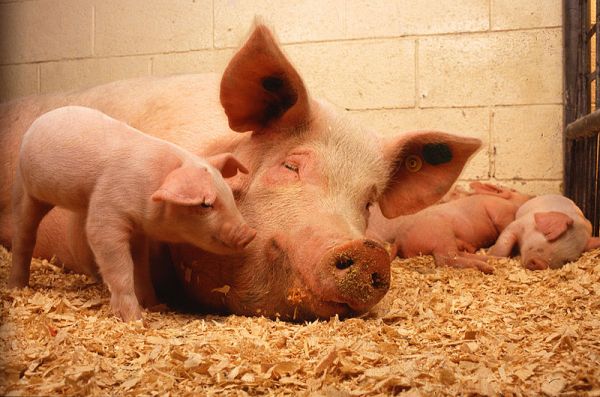 It’s hard to imagine New York City filled with farm animals, but we’ve already read about the horses that provided transportation, and the cows that provided milk. Nineteenth-century Manhattan was also home to pigs that roamed the streets while the human population of the city exploded. Charles Dickens described seeing them during his 1842 visit.

Stepping onto Broadway, New York’s biggest commercial thoroughfare, Dickens encountered “two portly sows” and “a select party of half-a-dozen gentlemen hogs” among the brightly dressed ladies and a bustle of coaches. Even more than this strange sight of pigs roaming the city’s streets, Dickens was captivated by the free and easy swine lifestyle—a “roving, gentlemanly, vagabond kind of life.” Scavenging curbside trash in droves, New York’s wandering pigs were on “equal, if not superior footing” with humans—a model of self-sufficiency.

“They are never attended upon, or fed, or driven, or caught, but are thrown upon their own resources in early life, and become preternaturally knowing in consequence,” remarked Dickens in American Notes. “Every pig knows where he lives, much better than anybody could tell him. At this hour, just as evening is closing in, you will see them roaming towards bed by scores, eating their way to the last.”

Not everyone was as charmed by pigs in the streets of Manhattan. While they provided a buffer against poverty and hunger for their owners, and garbage disposal in a city that did not provide it, wealthier New Yorkers found them disgusting, which affected property values. The battles against the hogs became an early example of gentrification, which you can read about at Quartz. -via Metafilter