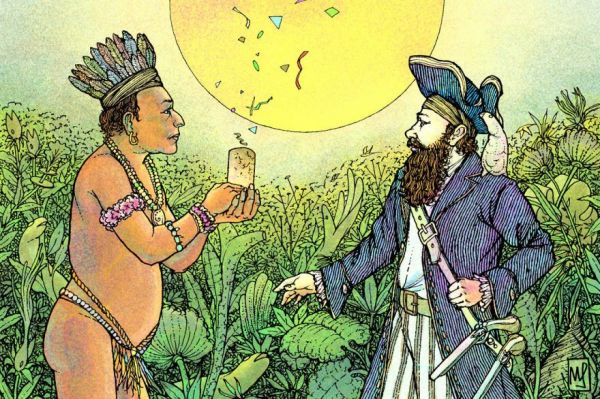 In articles on the history of chocolate, we learn that cocoa was used in the Americas for thousands of years, and brought to Europe by the Spanish conquistadors. But England usually isn’t part of the story, and when it is, we just learn that the English didn’t know what to do with chocolate. Even on the continent, it took quite some time before consumers developed a taste for the strange import.

“Strange” is an understatement. At first, many Europeans simply couldn’t stand chocolate. Benzoni, an Italian traveler in 1500s Nicaragua, said that chocolate was more fit for pigs than humans. A Jesuit traveller in the 1500s compared the foam—one of the most important aspects of the beverage for indigenous Americans—to feces.

By the early 1600s, however, tastes were changing. Maybe it was because Spaniards had spent a century sipping chocolate in diplomatic meetings with indigenous leaders, part of the strategic military alliance that enabled European conquest. Maybe it was the addictive shock of caffeine in the era before coffee and tea captured Europe. Or maybe, as Norton argues, it was a result of the ever-permeable nature of colonial relationships, in which—without intending to, often without wanting to—the colonizer can’t help but take on the tastes and habits of the colonized.

England owes it first chocolate recipe to a botanist named William Hughes who caught a ride to the New World in the 1630s as a sailor on a pirate ship. What he learned was later published in a book that extolled the wonders of cocoa and gave England a recipe for hot cocoa that turned the nation on to the wonder of chocolate. Read the story of William Hughes, complete with his cocoa recipe, at Atlas Obscura.