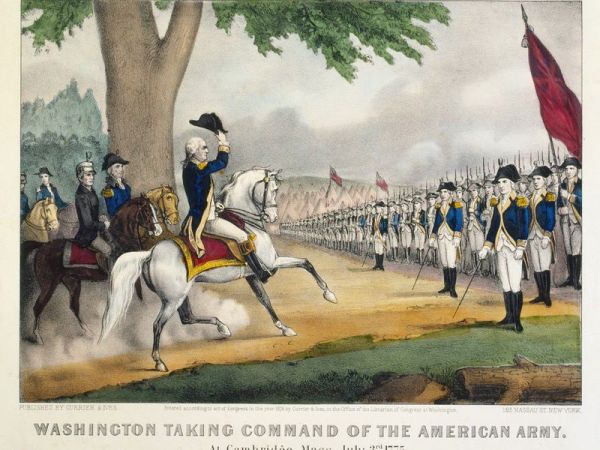 Early in his tenure as the commander of the Continental Army, George Washington was nearly the victim of an assassination. When the plot was unearthed, Thomas Hickey, one of Washington’s personal guards, was convicted of mutiny and sedition. Washington staged his execution in front of 20,000 people in New York in order to send a message about his power. What Washington did not reveal was that Hickey was only one of a gang of plotters, and the real message was for the rest of them, and any other soldier who considered mutiny. That such a plan was necessary underscores the difficulties Washington had forming an army.

Americans love to tell the story that we were this ragtag group who saw a common goal, and we all got together, and we all won the day. It just wasn’t that simple. We were an actual mess. One observer said [the colonials] were, “the most wretchedly clothed, and as dirty a set of mortals as ever disgraced the name of a soldier.”

We weren’t soldiers at all. We were farmers and common laborers, ex-criminals, beggars, some suspiciously old, some suspiciously young. We were carrying pitchforks and shovels as weapons, other people have no weapons at all. We’re not one united fighting force. We’re wearing uniforms from the local militias from Massachusetts, Connecticut, Rhode Island, New Jersey. A majority are wearing dirty work shirts and tattered pants.

Why are people switching sides? Because we were getting creamed. Because we may lose. It’s cold. We have no weapons. It’s a disaster. When you have a moment where you think we’re going to lose, that’s the first moment where people say, “Maybe I should switch sides.”

The extent of the assassination plot has been more or less hidden since then. The details are in Brad Meltzer’s book The First Conspiracy. An interview with Meltzer at Smithsonian doesn’t tell us much about the conspiracy itself, but it does explore the early days of Washington’s command and the process he used to bind the army together in loyalty to both their leader and their goal of freeing America from the British.